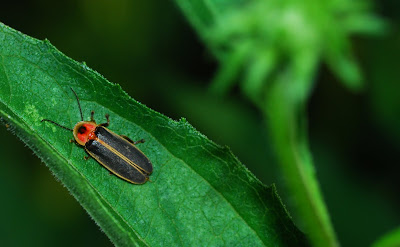 By whatever name you call them, is there anything more charming or reminiscent of childhood than the lightening bug, or firefly? As a kid I remember countless hours spent outdoors soon after the sun would set, chasing these clever insects all over my yard. How can an insect be clever you ask? Anything that can light up it's backside as a effectively as these little creatures do has to to clever. Many lightening bugs were sacrificed to my childhood fascination. I would place them in jars and create lanterns, convinced no one was as ingenious as I. I even recall one summer a cute neighbor boy asking me to marry him as he placed a "glowing diamond" on my finger. I was sure there could be no diamond ring anywhere as pretty as the one he gave me. It had to be true love!

Childhood soon gave way to adulthood and more grown-up pursuits, but I never fail to smile or get excited each time I look across a country field and see it aglow with these lovely insects. My imagination forces me to see a field of sparkling stars flashing out a code that I'm not meant to understand. The first warm days of spring, will bring these insects out in large numbers, and they remain with us throughout the hot summer months. Long before the first freeze they disappear, there seems to be some encoded message in their genetic make-up that lets them know that cold temperatures aren't far away.

I can remember many years ago my brother from Oregon paid us a visit. He was enamored by the fireflies, he could not get over his own amazement at their simple beauty. He had never seen one, fireflies do not live in the Northwest. I couldn't help but feel just a bit sad for a childhood spent without these endearing creatures. 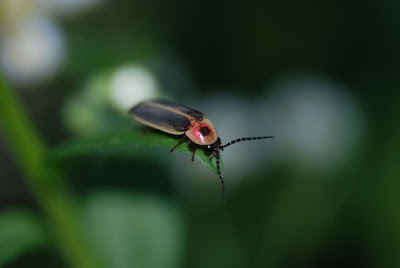 Lightening Bugs, or Fireflies are beetles, which many people find hard to believe. First of all they do not have hard outer shells like most beetles, and they resemble many of the true bugs we are familiar with. Then there is the name Firefly, but it isn't a fly at all. So it's appearance and it's name are a bit misleading. They begin their life as worm shaped larvae, and are even called "Glow worms". Yes, they are able to glow that magnificent green even as babies. I've never actually seen one, which seems odd to me given the sheer number of adults we have around our farm.

During the daylight hours they will secret themselves away in bushes, shrubs, or in the grass. Then at night the light show begins. The female will signal from the grasses for passing males. In many species it is only the male who flies, and he will recognize a signal from his own species. Once he locates her, he will fly down to her and mating will occur. However, sometimes the signal is a deception, there are females of some species that have figured out if they mimic another species light signal they can lure unsuspecting males in and dine on them. What deceit!
These poor unfortunate males have no idea what is going on and are easily taken advantage of, that is the disadvantage of having only "one thing" on your mind.

These insects are sure to capture the imagination of children for eons to come. They are gentle unassuming insects, that do not bite, sting, or eject smelly substances on us. They can be a challenge to capture and sure to cause great delight when finally caught. As they sit on your hand, flashing their ever present light.
Posted by Shelly Cox at 1:42 PM