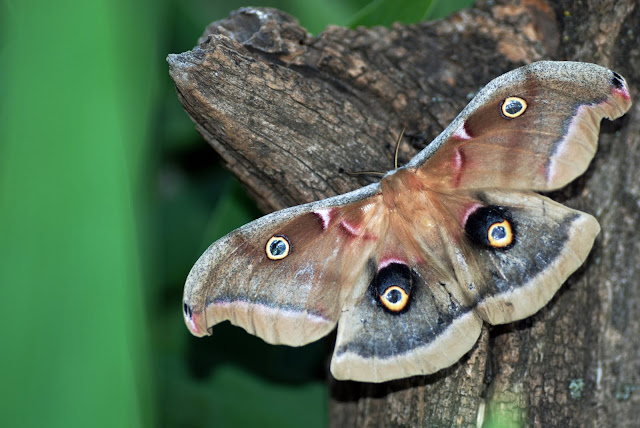 This large gorgeous moth is the Polyphemus (Antheraea polyphemus). They have a wingspan of almost 6 inches. Their coloring is spectacular, with various shades of tan, brown, gray and beautiful pink. Those large eyespots on their hindwings are used for protection from predation. Many birds and other creatures might think twice before trying to dine on this insect if they assume it is something other than what it is, which is where those "eyes" come in. The one pictured here is a female. Three simple ways to tell male from female are

1.) The males have large feathery antennae, these are used to detect the pheromone the female emits. He can

smell her from great distances.

2.) The females are typically much larger than the males.

3.) The females also have very large abdomens, this is for egg production.

The Eastern portion of the United States is home to many large moths in the family Saturniidae, which are the silk moths. These include the Polyphemus, Luna, Promethea, Rosy Maple, Io, Cecropia, and the Imperial to name but a few. Each of these reside in Missouri. The Polyphemus is one of my favorites, second only to the Luna. 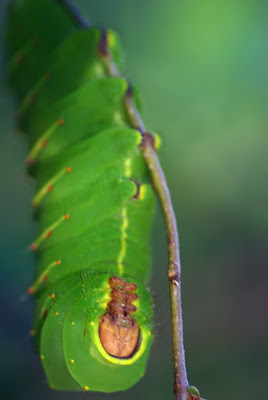 The overly large caterpillars of these moths are nearly as beautiful as the adults. These caterpillars are eating machines, they eat huge amounts of leaves gaining so much weight that by comparison if a human baby ate as much as a caterpillar, in a single weekend your baby would weigh as much as a hippo. They need to pack on this excessive weight to keep them alive as adults long enough to mate and lay eggs. Once they reach adult size they do not eat, their only goal is to find a mate, breed and lay eggs. The extra weight that they put on as caterpillars is what keeps them alive for the 5 to 7 days of their adult life.

They can be found in or near hardwood forests, as well as urban, suburban areas and orchards and wetlands. The caterpillars feed on maple, elm, oak, willow, and birch as their host plants. The caterpillars rarely become a serious agricultural pest as the female's egg laying habits are very random. If they were to use a very young tree as a host there is the potential the tree could damaged. Occasionally these moths are attracted to lights at night. I've found several of them at a mercury vapor light and a white sheet that I put up.