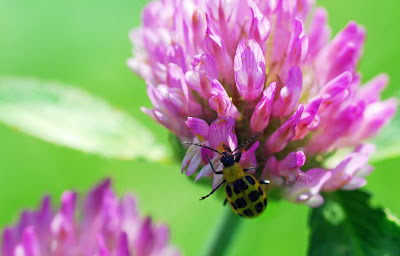 Spotted Cucumber Beetles (Diabrotica undecimpuntata) are very common leaf beetles in the family Chrysomelidae. They can be found throughout all of North America and are abundant in Missouri. Of all the leaf beetles this is probably the one I see most frequently. These are somewhat small beetles and if it weren't for their bright lime-yellow coloring they would most likely go unnoticed. They are quick to move behind leaves or other hiding spots when approached, which can make them difficult to photograph, but patience usually pays off. Each of the bright yellow-green wings has 5 black spots, with another prominent spot that overlaps both wings near the pronotum. This gives them a total of 11 spots. 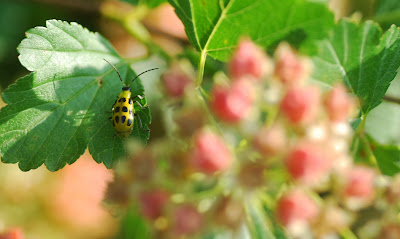 These beetles will overwinter in leaf litter near fence rows, wood lots and areas near protected buidlings. In the spring with the return of warm weather they will become active again. They will seek mates in early spring and the female will lay her eggs in the soil near the base of host plants. When the eggs hatch the young larvae will burrow into the soil to feed on the roots of various plants. After a few weeks they will emerge as adults and it is these grown up beetles you will find in your gardens feeding on the leaves of cucumbers, as well as squash, melons, beans, beets, tomatoes, potatoes, eggplants, cabbage and a host of other garden favorites. The larvae tend to feed only on the roots of melons and cucumbers. 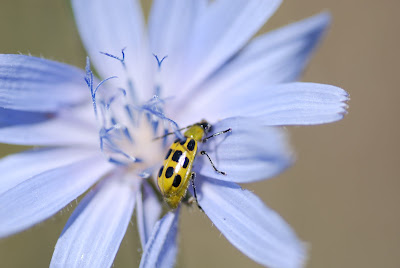 In large numbers these beetles can be significant pests to garden crops. There feeding habits can reduce yields, and they are also know vectors of bacterial wilt and cucumber mosaic. Some Sevin-Dust goes a long way to controlling them and keeping them from munching away on your plants. Or if you have the patience, you may pick them off one beetle at a time. Fortunately we've not encountered them in significantly large enough numbers to warrant any control being necessary. I find them to be beautiful beetles and can't resist photographing them whenever I spot one.