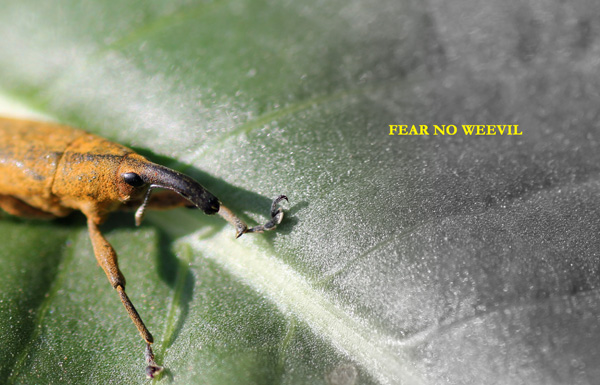 Rhubarb Weevils (Lixus concavus) are found throughout most of the United States, and as their name indicates are fond of rhubarb as well as dock, sunflower and thistle. The one pictured here is feeding on curly dock that grows near our garden. I noticed several of them on the leaves beginning in mid-April. I've not discovered any severe damage being done to the dock, and I would assume it would take a huge infestation of these beetles before any real harm would come to the plants. Since dock is not a plant I am particularly fond of I leave them be. I do not grow Rhubarb, so no worries there either. For gardeners who do grow and value their rhubarb, then control may need to be implemented. From everything I've read, the best way to control them is to simply pick them off the leaves of the plant. They are large enough at a 1/2 inch in length to see which makes finding them and removing them by hand is no real problem. It is much better than using pesticides, which can be harmful to beneficial insects. The female will lay her eggs inside the stems of plants. The eggs hatch and feed from within the plant. They are unable to survive inside the stems of the Rhubarb plant because of its growth habits. The plant continues to grow and constricts the eggs or larvae and they will not reach maturity. Good news there! However, they will survive inside the wild host plants like thistle, dock and sunflowers. So if you want to help control their numbers remove the wild host plants sometime in July and this will prevent them from completing their lifecycle. Those beetles that are left alone will overwinter in leaf-litter and become active again the following April or May.

These weevils (A.K.A. snout beetles) are actually black,but are covered in a yellowish-orange powdery substance that gives them a completely different appearance. I've never actually seen a black one, each one I find is always covered in this orangish powder.


When these beetles sense danger or are disturbed they will "play-dead" and roll over on their backs, legs curled and lay completely still (pictured below). Sometimes they will roll completely off the leaf and disappear in the leaf litter on the ground. 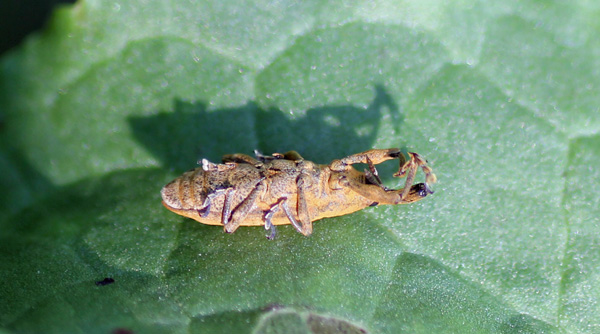 Weevils are one of my favorite beetles and are the largest groups in the order coleoptera with over 60,000 species worldwide. These beetles look like little elephants carrying their trunk around on their face. This trunk-like snout is the mouthpart of the weevil and contains chewing mandibles at the end of the snout which allows them to chew on the preferred food plants.  Many weevils are damaging to crops and billions of dollars are spent each year to control them. Fortunately the weevils that live on our farm pose no real threat to anything and are able to go about their business undisturbed.
Posted by Shelly Cox at 9:32 PM