This large prehistoric-looking creature is a Vinegaroon or Whip Scorpion, they are related to spiders and scorpions in the class of Arachnida. They are in the order Uropygi which means "tail rump" which refers to the whip-like appendage at the end of the abdomen. This particular specimen pictured here is Mastigoproctus giganteus which is native to the southern and south western region of the United States. They are one of the largest vinegaroons of the 100 species found Worldwide, and they reach lengths up to 3.5 inches without the tail appendage added in. Like spiders they have 8 legs, with the two front legs being specially adapted as sensory organs which allow them to feel around their environment much like a blind man uses a cane to acquaint himself with his surroundings. They have modified mouthparts that resemble boxing gloves, but are actually pinchers capable of pinching human skin as well as grabbing their prey.

Unlike spiders they have no venom glands and also unlike scorpions they lack a stinger. Their only form of defense is a special chemical they can spray from their tail that is made up of acetic acid and octanoic acid and smells like vinegar. It is this vinegar-like spray that they get their common name of VINEGARoon from. This spray is harmless to humans unless you are sensitive to vinegar. It may be best to not handle them  as the only way to know if you are allergic is to get sprayed. Avoid holding them near your face, as getting this spray in your eyes would be a bad experience. I handle this one frequently and have had no problems. As long as you approach them quietly and in a non-threatening way, handling them should not be a problem, but be aware that a reaction could occur and medical assistance may be needed for sensitive individuals. 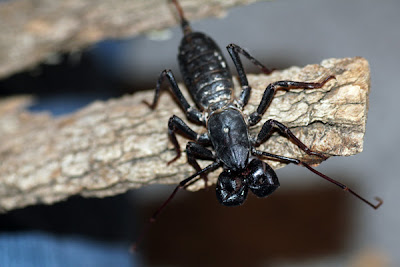 They are found in tropical, sub-tropical and hot dry areas. They are absent from Australia, Europe. There are introduced species found in Africa, but no native species are there. They will dig burrows that they transport their prey to. They avoid sunlight and prefer dark, humid locations. They may also be found under rock piles, wood piles, rotting wood, and other natural debris. They even show up in basements, garages and sheds in their native range.Vinegaroons feed on insects, millipedes, worms, slugs and small vertebrates. While it is true they are a bit scary and intimidating looking, there is nothing to be afraid of, they in fact provide a valuable service to us in the form of insect control. 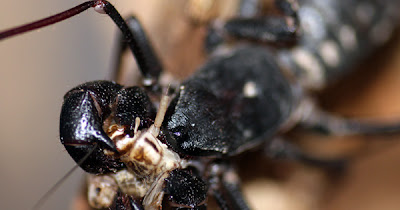 Males will form a sperm sac called a spermatophore that they will deposit on the ground. Much like a scorpion they will drag the female across this sperm-sac so that she will take it up into her body. She will lay up to 35 eggs in a burrow. The eggs are encased in a protective mucous membrane to keep them moist. When the eggs hatch the young will crawl up on their mothers back and attach themselves there with a suction-cup like devise. They will remain with the mother until they shed their skin for the first time. They will be all white and very vulnerable at this stage. Staying with their mother affords them some protection. The mother will not eat throughout the egg laying process....and she will die as soon as her offspring molt. The young are slow growing and will not reach adult size for 3 years. They may live up to an additional four years after reaching their adult size.