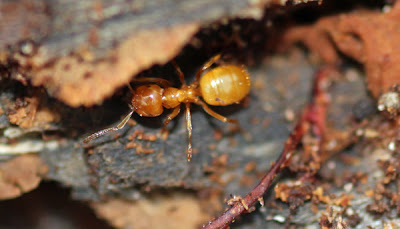 Citronella ants in the genus Lasius (claviger group) claviger. They get their name from the lemony citronella-like scent they emit when they are disturbed. This fragrance is much more noticeable when they are crushed. Even though they are found throughout the United States, they are more common in the Eastern United States. These ants live in underground chambers, or within tree stumps and logs.


Often confused with termites when they make it into homes, which could be because of the winged individuals that show up at certain times of the year. They are larger than the typical workers of the colony and vary in color from light yellow, light brown or dark reddish-brown. The workers are almost always yellow, or this light yellowish-orange. Workers of this species measure about 1/4-inch in length. Two closely related species are smaller. The winged females and males that swarm to start new colonies may measure up to 5/8-inch and 3/8-inch, respectively. 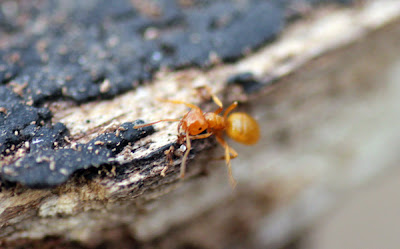 Not much is known about their underground colonies. They are believed to milk subterranean aphids for honeydew, just like dairy farmers would tend their cattle. Nest sites may include open woods, pastures and fallow fields, gardens, lawns, and next to house foundations. Also, some colonies are located beneath concrete slabs and large rocks, and in and beneath rotting logs.

Citronella ants should be considered only as a nuisance pest species. Normally, they go unnoticed unless the swarmers enter through expansion cracks in slabs or around door openings. Although these intrusions may alarm homeowners, the ants will not reproduce within the home nor will they attack stored goods or structures.

In some cases, swarms may occur repeatedly and attempts should be made to locate the colony or colonies. Colonies typically have mounds of soil around the openings where excavated soil is deposited. These mounds can be treated by injecting an insecticide into the holes. Although numerous insecticides are labeled for ant control, many of these can only be used by licensed individuals. Therefore, a professional pest control company should be contacted because they can use materials not available to the general public and have access to specialized application equipment.

Pesticides are poisonous. Read and follow directions and safety precautions on labels. Handle carefully and store in original labeled containers out of the reach of children, pets, and livestock. Dispose of empty containers right away, in a safe manner and place. Do not contaminate forage, streams, or ponds. 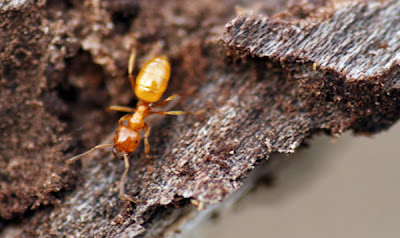 I took the liberty of copying most of the information about this species directly from the website listed below. They did such a wonderful job of describing this species, that I could not see how I could improve upon it. You will find that many of the websites out there that talk about this species are in terms of eradicating it from homes. I liked this particular website because it does not promote pesticide companies, it merely gives valuable information. It does however give advise in the event that you should find yourself in need of removing these species from your residence.