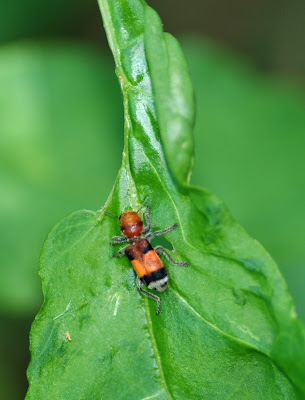 This little orange and black beetle is one of the checkered beetles in the genus (Enoclerus). This one is commonly called the Orange-Banded Clerid (E.ichneumoneus). They measure up to 1/2 inch in length and are brightly colored with orange and black, the base of the wings have white on them. Their shape and color is very reminiscent of a velvet ant, so most likely this is a form of mimicry. It could be assumed that this mimicry would give them some protection from predation, as velvet ants have a bad reputation for giving a nasty sting. Their other common name of Cow-Killer pretty much says it all.
These beetles are very common throughout the Central and Eastern portions of the United States as well as parts of Southern Canada. These little beetles are predators of other insects as well as insect eggs, both as adults and larvae. The adults have been reported to feed on some pollen. They seem to favor woodland habitats, the one pictured here was photographed in some scrubby timber near a fence row. There is very little reported on these insects. With so many insects out there in this great big world of ours, I guess it would be impossible to learn all there is to know about each species. Or maybe this species just isn't interesting enough to attract the attention of budding entomologist and seasoned entomologist alike. I for one find these little guys very attractive to look at, and they are not known to cause any significant economical problems. Then again on the flip side, they aren't really of any economical importance either. I guess you have to be big and bad or beautiful in the insect world to warrant time spent on you.
Posted by Shelly Cox at 10:24 AM