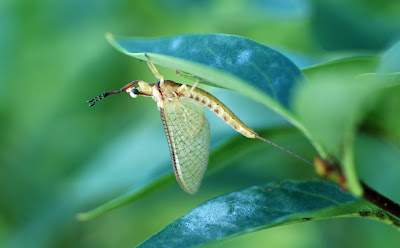 Mayflies are not actually flies at all. They are insects in the order Neuroptera and the family Ephemieridae. How do we know if something is a fly or merely called a fly? Here is an easy way to tell the difference, if the name is all one word like Mayfly, Dobsonfly, Caddisfly, Dragonfly, Damselfly, etc.. then it is definitely NOT a fly, but rather belongs to some other order of insect. If the insect has a first and last name like House Fly, Bot Fly, Flesh Fly, Flower Fly, Robber Fly, Bee Fly....etc. Then it definitely IS a fly.

Mayflies are interesting insects in that they have one of the shortest lifespans (as adults) than most any other insect. They typically emerge from slow moving streams in huge aggregations much to the delight of trout and birds. The males are usually the first on the scene, they will patrol the area seeking females as they emerge. The poor females barely have time to leave their watery home before being pounced on by enthusiastic males. Once they are bred the females will lay their eggs in the water. These tiny eggs drop to the bottom among the sediment and hatch soon after. They will live up to a year in this watery environment before emerging the following spring or summer. Within a couple days, three or four at the most, nearly all the adults will have perished. In areas where their numbers are in large concentrations it is not uncommon to see thousands of "bodies" along the shoreline piled up in a mass above ground burial fashion. 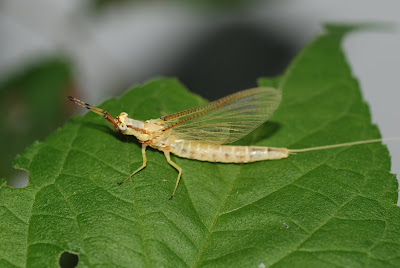 Mayflies come in many colors, and sizes. They range from 1/2 inch to 1 1/2 inches. The Burrowing Mayfly (pictures 1 & 2) is the largest in the Eastern United States.  They are a beautiful golden color which also earns them the name of Golden Mayfly. This species as well as other species of mayflies are commonly used as models for the flies that fishermen create to fish for trout. 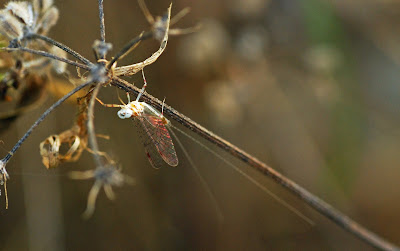 As aquatic nymphs they will feed on other tiny aquatic insects. When they emerge as adults they do not feed, their energy is used to find mates, breed and lay eggs. No time for feeding when your lifespan is only mere few days. These insects for some reason are attracted to lights, and are often found at porch lights at night.

The one in the third picture was photographed during the day near Happy Holler Lake in Savannah, MO. It was ghostly white and very tiny. If it hadn't of flown up in front of me when I walked too close to it, I would not have seen it. Sometimes these insects fall victim to other insects or spiders as a choice food source, such as this jumping spider (picture 4). As small as these mayflies were, and considering they are mostly wings, I can't imagine there was much nutrition in that meal. I guess if you consume several of them you would gain some beneficial nutrients. 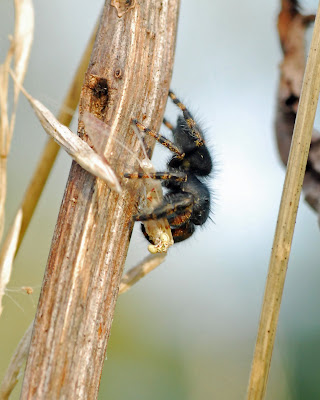 Begin looking for these insects in June or July. Their numbers will increase significantly at this time and they are quite easy to find. Their wings are almost gossamer in appearance and they hold their legs in such an interesting fashion they make for great photography subjects.
Posted by Shelly Cox at 2:12 PM