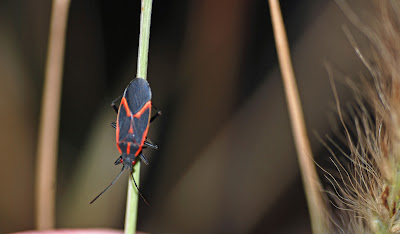 The second most common name for this bug, Democrat Bug, is most certainly not for it's political preferences. Most people know this insect as the Eastern Box Elder Bug (Boisea trivittata). I've never been able to find any definitive information that explains why in some parts of its range it is called Democrat bug, which is exactly what I've always called them. So this seems to be a common nickname in NWMO.
The species name of trivittata apparently refers to the three red stripes on their bodies. They reach lengths up to 1/2 inch and are all black with those distinctive red lines, along with red eyes. As their name implies, they are found throughout the Eastern United States. The adults like juices from Maple trees, and fruit trees as well as some nectar. The nymphs feed on various things including the juices of the host trees, seeds from trees, dead insects and even members of their own species as they shed their exoskeletons while molting. After mating, the females will deposit eggs behind the bark of trees, Boxelders are commonly used, but so are Maples, and Ash Trees. These insects often congregate in large numbers in the fall, and will be seen on the south facing sides of homes, and other structures as they warm themselves on sunny fall days. They will make their way inside in large numbers and seek shelter for the winter. They cause no damage, they do not bite, sting, stink or are in anyway offensive. They are merely a nuisance to have around. If you cannot abide by them in your house, merely suck them up in a canister vacuum and turn them loose outside. Some years their populations seem to be more plentiful than other years. This year I have not noticed them in any significant number at all, in fact I've only seen the one photographed here and maybe a dozen others. I don't mind their presence, there are certainly worse things to have around.