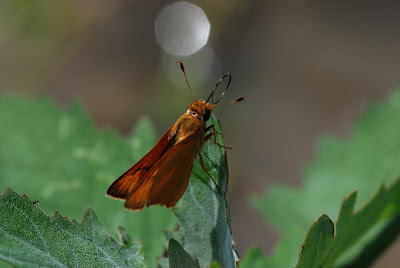 This pretty little skipper is the Delaware Skipper (Anatrytone logan). They are found in marshes, prairies, along roadsides, in open fields and backyard gardens throughout much of the Eastern United States and portions of Southern Canada. There is also populations in New Mexico. Grass Skippers are notoriously difficult to identify, this species is small with a wingspan from 1 inch to 1 11/16 inches, and has bright yellow-orange wings, the forewings are bordered in black, and there is a black bar at the end of the wing cell (visible in this picture). Which for me is the key characteristic that helps me ID this species. Females have wider black borders and darker markings than the male. 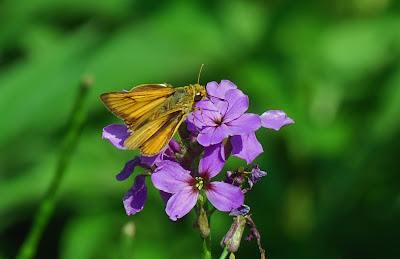 Mating occurs in late spring. Males will typically perch 1 1/2 - 2 feet off the ground waiting for females to pass by. After mating, the female will lay eggs singly on the leaves of the host plants. In the case of this species it is various grasses including,  Big Bluestem, Wooly Beard Grass and Switchgrass. In Missouri there is probably only one generation per year. In areas further south they may have two generations per year; weather permitting. Populations in Florida have several broods per year. Adults sip nectar from pink or white blooming flowers such as Milkweed, Mountain Mint, Marsh Fleabane, Thistles, Pepperbush, Buttonbush, Sedum and Pickeral.
If you would like to attract this species as well as other species of skippers, try planting various native grasses and native wildflowers around your property.
Posted by Shelly Cox at 11:43 AM