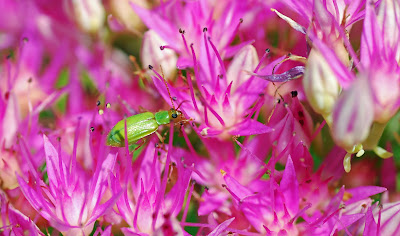 This adorable lime green beetle is the Northern Corn Rootworm (Diabrotica barberi). They are very small, just over 1/4 inch in length. Although very tiny, don't let their size fool you, beetles in the Diabrotica genus  are some of the most destructive insects in the United States. With approximately 30 million acres of corn infested with some type of corn rootworm, and with estimations that this number could be increased by 20% over the next several years it is easy to see why these beetles are of economic concern. These beetles cause an estimated $1 Billion annual loss of revenue to the agricultural market. These beetles are native to the United States, and began appearing in European countries in the 1990's. It seems they were spread to Europe during the Yugoslavian War, probably through military transport. It is still widespread on military bases throughout Europe. They have since spread to Italy, Germany and France. These beetles are forbidden in many laboratories because of the difficulty in controlling them, if any should escape. They are resistant to many pesticides and are hard to eliminate once established.
After mating, the females will lay eggs in the soil near corn plants. This is done late in the summer or early fall. These eggs hatch in the spring and the young larvae will feed on the roots of corn plants. In about 2 to 3 weeks they will pupate and will emerge as adults a few weeks later. The adults prefer to eat on fresh corn silk, but will also feed on tassels, and leaf tissues. The adults are also attracted to flowers like squash, cucumber and wild carrots, or in the case of the one pictured sedum where they feed on pollen. I've also seen them gathering pollen at thistle. These beetles remain active until the first hard freeze kills them. Look for these little lime green beauties now, while the adults are active and seeking mates, or looking for places to lay their eggs.
Posted by Shelly Cox at 10:34 AM