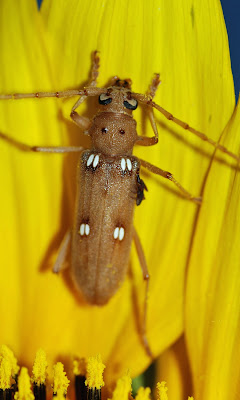 (there is a hitchhiker in this photo---can you figure out what it is?)
This longhorned beetle is the Ivory-Marked Beetle (Eburia quadrigeminata), sometimes they are referred to as Four-Marked Ash Borer. They are a fairly small to average sized longhorn, reaching a body length up to 3/4 of an inch, and approximately 1 1/2 inches with antennae. Light brown in color, with six bright white spots on each elytra (wing) that are surrounded by a dark ring. They have a fairly broad range that includes all of  the Eastern and Central United States, as well as parts of Mexico and Arizona. 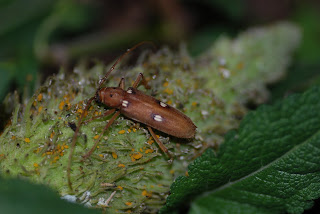 Deciduous woodlands and the nearby area is their favored habitat, but they will often come to lights at night. Females deposit eggs on hardwood trees, usually in the cracks of bark. (Let me clarify here, they will only feed on dead or decaying trees, they will not harm healthy living trees...Thanks Ted for pointing out my oversight).When the larvae hatches it will eat its way into the heartwood of the tree. They feed on the wood pulp. Adults will readily come to fermented molasses bait. In large numbers these beetles could become serious pests to trees, and can cause significant damage. Because of their boring habit, and their capability of reaching the center of even the largest of trees it is not uncommon for these beetles to emerge as much as 10 to 40 years later in wood that was used to make furniture or hardwood flooring.
Posted by Shelly Cox at 10:10 AM