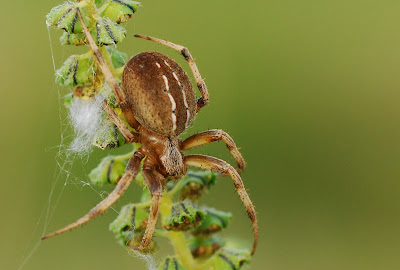 Orb Weavers are in the family of spiders called Aranidae. They are one of the largest groups of spiders in the World with over 2800 species worldwide. They are identified primarily by the web they build, which is an intricate round or "Orb" shape. Depending upon the species of spider that builds it, some of these webs can get quite large. I found one in my yard the other night that was easily 2 feet in circumference. It is believed that Orb Weavers first appeared on Earth during the Jurassic period approximately 200-140 million years ago. So as you can see, they've been around quite some time perfecting the art of web building. Many species of orb weavers design an intricate pattern into their web called a stabilimentum. This is a zig-zag looking line that runs up the center of the web. It is uncertain what the exact purpose of this feature is. The most common belief is that it is a lure of sorts for insects, or a deterrent to keep birds away from the web. I've also heard accounts that say it is a stabilizing structure, making the web more sturdy. Whatever its purpose it is an interesting phenomena. The garden spiders in the genus Argiope are the most famous spiders for using this feature. 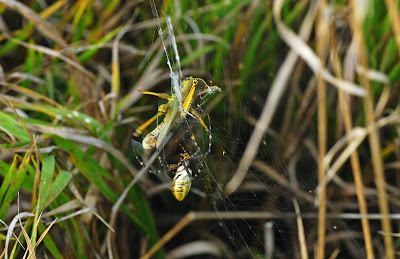 This banded garden spider captured a grasshopper and busy wrapping it in silk, perhaps to dine on later. Spiders use their fangs to inject venom into their prey. This venom acts fast to keep the struggling victim from tearing apart the web. Soon the quarry will be paralyzed. If the spider is particularly hungry she will dine on whatever is unfortunate to get caught in her web, right at that moment. If she fed recently, she will wrap it in silk and save it for leaner times, just like this individual. 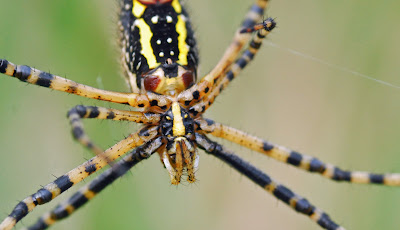 Close-up of the fangs

Almost always the webs are vertical in shape and you will find the spider hanging upside down usually in the center. There are a few Genera within this family that do not build webs at all. They instead use a sticky line of silk, tainted with a pheromone that acts as a lure to certain species of moths. The moths are tricked into thinking a mature female ready to mate is nearby, and instead they meet an untimely demise, and become dinner to a hungry spider. Such trickery! Many spiders within the Orb Weaver Family build new webs each night, they will consume the old web typically at dusk, and shortly thereafter construct a new one. The purpose of this I assume is so that they have a strong web at all times, making it more difficult for prey to wiggle away to freedom. 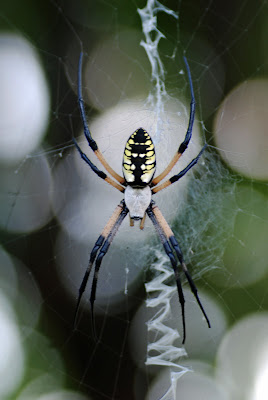 Mating between these spiders usually takes place late in the summer or early fall. The males will tap out a little love dance on the edge of the web, if the female is receptive, she won't eat him (just kidding). Although some females will dine on their mates, it isn't a typical response by the female. I guess it just depends on her mood. There is one European species that bites through her mates stomach, and holds on with her fangs (can we say ouch!). And men think they have it bad! Males will perish soon after mating, and even occasionally during. 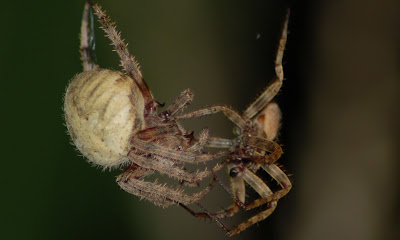 Mating Orb weavers, male is on the right, notice how much smaller he is than his female counterpart.

This is the perfect time of year to see these wonderful, if not a bit creepy creatures. They have almost all reached adult size, and are busy building their webs everywhere. They are fascinating to watch and are performing a great service to us, by consuming many insects that we often find a nuisance, most especially moths and flies. It is a bit worrisome to walk into one of these webs at night, and find yourself wondering where the spider is, hoping and praying it isn't on you! Even with that being said I still find myself looking for them and photographing them at every opportunity. 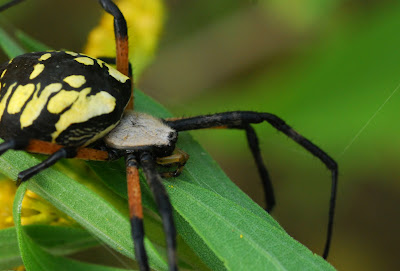