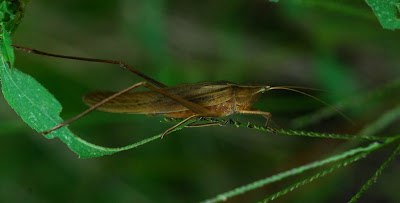 When you hear the word conehead; perhaps it puts images in your head of Saturday Night Live and those wacky aliens from planet Remulak; played by Jane Curtain and Dan Aykroyd. In this case though I am referring to a genus of Katydid's called Neoconocephalus. I wonder if these insects is where the idea for alien coneheads was conceptualized? Most of the 14 species in this Genus of  coneheads are found in Eastern North America. They are easily identified by the somewhat "Pointed" look to their head. The wings extend out beyond the abdomen, and they can be either green or brown. Some species are quite large, and can reach lengths up 3 1/2 inches. The one pictured here was almost 3 inches. 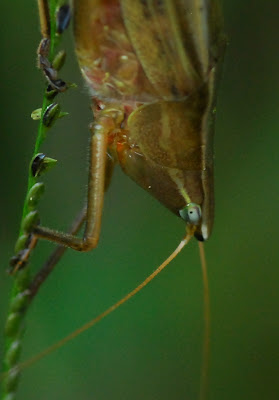 Females have an extremely long ovipositor, that they use to deposit eggs into clumps of grasses. Generally speaking the eggs will overwinter and hatch in the spring. The young nymphs look very similar to the adults. They can be found in most grassy habitats, including meadows, marshes, thickets and even cornfields. Adults eat seeds of grasses and sometimes sedges. The young nymphs feed on grass flowers and developing seeds. If mishandled they can bite, so best to handle with care.
Posted by Shelly Cox at 10:34 AM