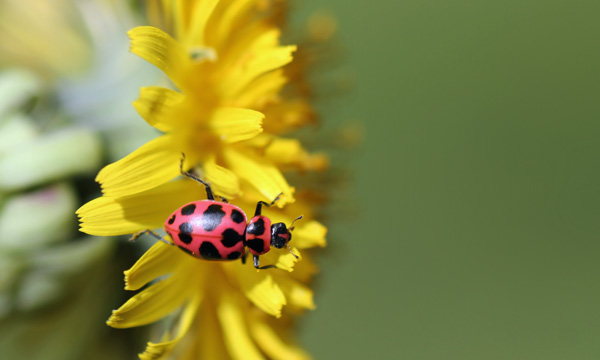 This lovely lady beetle is the Pink-Spotted Lady Beetle (Coleomegilla maculata), they are native to North America and are one of the most frequently encountered ladybugs in Missouri. They will often be found in meadows, prairies, gardens and most anywhere flowering plants occur. While it is true that they eat aphids, they will also eat mites, and insects eggs. It is also reported they will consume plant nectar, in fact it may make up as much as 50% of their diet, which is not so typical of other ladybugs. 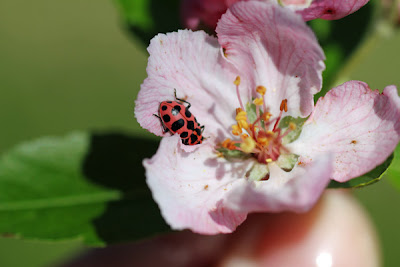 They sometimes are called the Twelve-Spotted lady beetle, and can range in color from red to pink. Their bodies are not the typical rounded or domed shape of most ladybugs, they are oblong in instead. There are two spots at the tip of the wings at the end of the abdomen that are characteristic of this species. There is only one species of this ladybug, with three sub-species occurring throughout their range.

1.) Coleomegilla maculata fuscilabris; which are more orange in color and have a small range that includes South Carolina to Florida,  then west along the Gulf Coast to Louisiana.

2.) Coleomegilla maculata lengi, which are commonly used to control whitefly outbreaks in greenhouses. They are excellent biological control of the Colorado Potato Beetle as they will feed on the eggs of this potentially damaging beetle. As much as a 58% reduction in Colorado potato beetles have been shown in some fields because of this subspecies. They appear to have a wider range than fuscilabris and can be found throughout the midwest and as far north as Canada.

3.) Coleomegilla maculata strenua, which is a western species found from Texas to California.


This species of ladybug is being targeted in a biological control study in Florida, where they are cross breeding Lengi with fuscilabris. Presumably this will create a predaceous ladybug suited to Floridas extreme climate and conditions. 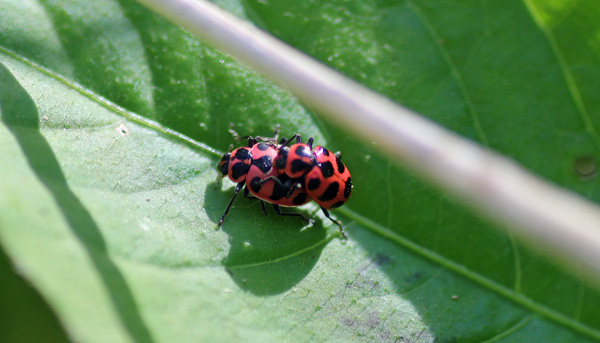 Mating typically takes place in the spring and summer, and the female may lay up to a 1,000 eggs in her life time. She will generally lay her eggs near a ready food source like aphids. Each larvae may consume between 3,000-5,000 aphids, mites, insect eggs and other soft bodied insects in their life time. This makes them extremely beneficial and good insects to share the garden with. Adults will overwinter in large aggregations much like the dreaded Multi-colored Asian lady beetle does, the main differences being them is the pink-spotted is native whereas the MALB is not! The pink-spotted behaves like a lady, she will not stain your fabrics or furniture, she will not bite and she does not stink. Sharing your homes, buildings or business with this species will often go unnoticed. They are not the bad guest that visits uninvited and leaves a mess in their wake. 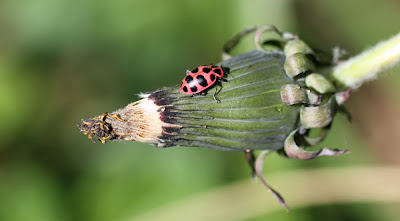 Because this species becomes active again in early spring, and they consume large amounts of nectar it is essential to their survival to have access to reliable flower sources before the aphids are present. Dandelions often are the flower of choice as they are blooming in conjunction with the first appearance of these beetles in the spring. I know we as humans seem to have zero tolerance for dandelions and view them as arrogant weeds that dare to overtake our perfectly manicured lawns. I for one tolerate the dandelions and am blessed with the presence of many pink-spotted lady beetles because of it. Our sterile lawns offer nothing in the way of benefits to many creatures, ladybugs included. My lawn has weeds, clover, dandelions, and consequently is teeming with life. My gardens are not full of perfectly formed flowers devoid of nectar or fragrance, instead they are alive with wildflowers, a few weeds and an abundance of insects, snakes, frogs, and other life forms that make the garden interesting. We as humans somewhere along the line lost sight of the way things were; and decided the way they SHOULD be. In our desire to have the perfect yard, and garden we deny ourselves the pleasure of enjoying the life that a free living garden provides. 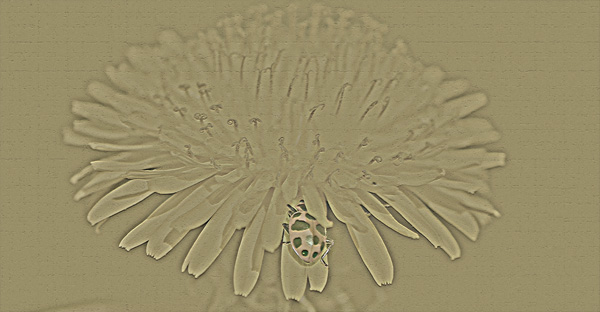