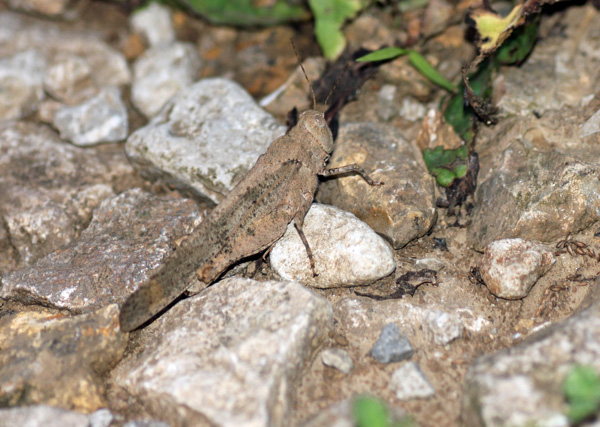 This large grasshopper is a Carolina Grasshopper (Dissosteira carolina) in the family Acrididae which are the short-horned grasshoppers. Depending upon their location they may also be called Road-Dusters or Black-Winged Grasshoppers. They are found throughout most of the United States with exception to Southern Florida, Southern Louisiana, Southern Texas and parts of Arizona.
This is one of the most common grasshoppers found throughout the summer months here in Missouri. They range in color from yellowish-gray, gray to tannish-brown. Their flight wings are black, and believe me, if you haven't ran across them, they are very flighty and fast. Photographing them can be a challenge in patience as you sneak up on them quietly, only to have them fly 15 feet away the second you are ready to snap a photo.
Reaching lengths of 2 inches or a bit more qualifies them as being large as far as grasshoppers in Missouri go. The one pictured here was photographed at Haddorn Conservation Area in Savannah near the flood waters. Experts at bugguide agreed it is a female due to the visible ovipositor under her wings and at the tip of her abdomen.
They are frequently found along crop fields, along roadsides, on gravel roads, in fence rows, railway cutaways and other disturbed areas with bare ground. Unless they take flight, spotting them is difficult as they camouflage themselves so well among the gravel and dirt. Rest assured though, they WILL take flight if you get too close. They feed on a wide variety of grasses and forbs and may occasionally become a pest of agricultural crops, especially forage crops.
The Carolina grasshopper is a strong, adept flier. During warm, sunny days the adults frequently fly over bare ground interacting with one another. Males are noted for their hovering flight. They rise almost vertically from the ground to heights of 3 to 6 feet, occasionally higher, and hover for 8 to 15 seconds. At the end they flutter down to the ground close to where they started. They may repeat this maneuver as many as five times. During the hovering flight tht attracts females. The display also attracts males so that a small aggregation of several males and a female may gather on the bare ground beneath the hovering male.
Males are much more active than females and most likely this is due to them seeking mates. Once mated the female will use her ovipositor to deposit egg pods within bare spots in the ground. The eggs remain underground all winter and hatch the following spring. The tiny nymphs will emerge from underground and begin feeding. They will reach their adult size by

mid to late summer which is when breeding will once again take place.

With the super hot temperatures we've been experiencing the past three weeks these grasshoppers alter their behavior in contrast to ground temperature. When the ground temperature reaches or exceeds 110 degrees they will start climbing blades of grass or stems of plants in what is referred to as "stilting." This gets their body off the hot surface of the ground where it is blistering, and into cooler environs. They will also orient themselves so they face the sun, which reduces the amount of their body coming in contact with the direct rays of the sun, which also keeps them cooler. To say this eludes to intelligence on their part would be a stretch, but it certainly eludes to a protective instinctual behavior that protects them from injury.


These grasshoppers are an important part of the food chain and are consumed by birds, snakes, frogs, toads, spiders, praying mantids, raccoons, skinks, skunks, mice, squirrels and other predators of insects. Even humans on occasion will consume grasshoppers for protein.