A few days ago while out hiking in this oppressive heat I discovered these two caterpillars on the limb of a small tree. I knew they were giant swallowtail caterpillars, what I did not know however was WHAT they were feeding on. I've walked this particular trail dozens upon dozens of times and cannot recall ever seeing this tree before. After returning home and looking up the host plant for the Giant Swallowtail I discovered that Prickly Ash was a common host tree. Since the little tree in question could definitely be classified as prickly with a decidedly thorny bark the mystery was solved.

When the caterpillars are young they show nothing of the beauty to come once they reach their adult phase, in fact they are very drab and resemble bird poop. This is a great strategy when trying to keep yourself from being eaten by hungry birds. Not many things will knowingly eat poop, so looking like such an unsavory substance seems to work. 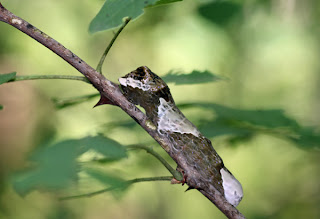 As the caterpillar ages it changes it strategy and becomes more snake-like in appearance. They even have fake eyespots to carry the ruse even further. Although I am not sure how effective this actually is, because I have never seen snakes less than 3 inches in length. Seems like mimicking a snake is carrying things a bit far. The caterpillar is also referred to as the "Orange-dog" or "Orange-pup" by fruit growers. The nickname hints at the damage these caterpillars can do in large numbers to citrus groves.

Giant Swallowtails (Papilio cresphontes) are the largest butterfly in Canada and the United States with a wingspan up to 6 inches. They are beautifully marked in shades of yellow and black. They generally begin flying in Missouri around May and continue through August. In our region there may be up to two broods per year. As Missouri lacks the citrus trees these butterflies favor as a host, they will instead choose prickly ash, and Hop Tree. The adults seem to favor nectar from lantana, azalea, bougainvilla, bouncing Bet, dame's rocket, goldenrod, Japanese honeysuckle, and swamp milkweed. 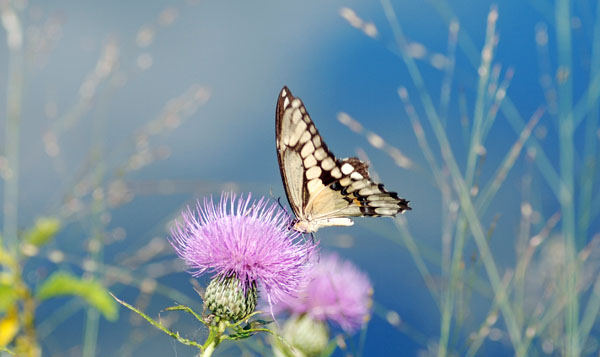 I've tried for several years to get a successful picture of this species and they have proven a challenge to photograph. I managed this picture a couple of years ago on thistle bloom and not a single image since.
Posted by Shelly Cox at 6:47 PM