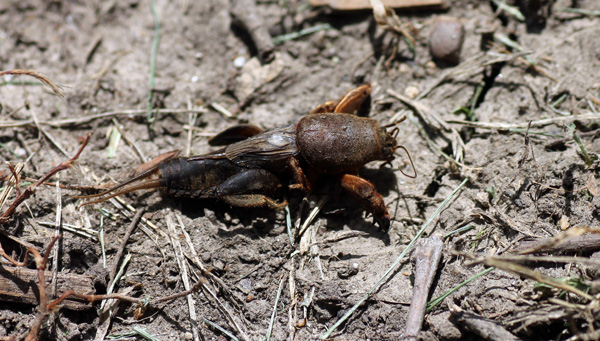 This odd looking insect is a Mole Cricket in the family Gryllotalpidae, they move more like a vertebrate than an invertebrate, and are truly one of the most unique insects in the world of arthropods. They are named after the underground mammal that goes by the same name. Just like moles these insects have wide, flattened front legs that are great for digging and swimming. They are also capable of flight, and may fly up to several miles in search of females in the spring. While they can run rapidly they lack adequate jumping skills like their cousins. They are very thick-bodied and may reach lengths up to 2 inches. Mole crickets are omnivores and will feed on a wide variety of things including larvae of other insects, worms, roots and grasses. They are commonly preyed upon by birds, armadillos, rats, skunks, snakes, frogs, raccoons and foxes making them an important part of the food chain. In Asia there are species that are frequently fried as part of the human diet. These crickets occur on every continent with exception to Antarctica. Their numbers are stable and they are relatively common with the exception to one species called the Prairie Mole Cricket which is listed as threatened and is found in prairie habitats across Missouri. Because Missouri has lost most of their natural prairie habitats to agriculture, and development we are left with only about 2% of our original prairies and those are in remnants. 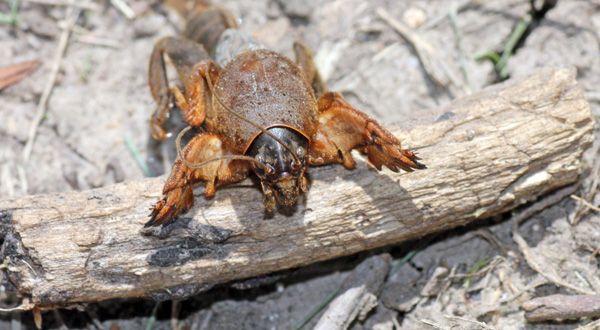 Mole crickets are nocturnal and spend the biggest majority of their life underground in extensive tunnels making them somewhat hard to find even though they occur in large numbers. In some parts of their range they are considered pests because of their preference for feeding on the roots of plants, grasses and other turfs. This is especially an issue in golf courses, and control measures are often needed to eliminate their populations. Mole crickets, like other orthopteras, go through simple metamorphosis, meaning they have no pupation stage. The young are born looking very similar to the adults. They lack fully developed wings and cannot fly. Adults and young nymphs overwinter and become active in the spring when males seek mates and the nymphs finish growing. They must complete up to 8 instars (molts) before reaching their adult size. Males will dig a horn-like tunnel and call near the surface of the ground, the horn-like tunnel magnifies the sound attracting nearby mates. It takes about 14 days for the eggs to hatch, some will complete their develop in the current season, others will spend the winter underground. Throughout most of their range there will only be one generation, the exception to this is mole crickets found in Texas, they will most likely have two generations per year.

1.) The Tawny Mole Cricket (Scapteriscus vicinus) is somewhat intermediate in its spread; it occurs from North Carolina to Louisiana, and throughout Florida, but thus far remains restricted to the southern coastal plain.


2.) The Southern Mole Cricket (Scapteriscus borellii)  is now found from North Carolina to eastern Texas, including the northern regions of Georgia and Alabama and the entire peninsula of Florida, and recently was detected in Yuma, Arizona.

3.) The Shortwinged Mole Cricket (Scapteriscus abbreviatus) is flightless, remains fairly confined to the southern Florida and southern Georgia-northeast Florida introduction sites, though it also occurs in Puerto Rico and the Virgin Islands. It has been redistributed in southern Florida, but is largely found in coastal areas.

Non-native species can and do cause significant problems for native animals and plants, it is often difficult to keep them out of the country or to control them once they are here. This is no exception with these three species.....they cause large amounts of damage to a wide variety of crops which causes significant financial losses to those industries. Chemical control is often expensive and not safe. Biological control is a much safer and more cost effective way to go, and there are specific insects that prey on these crickets which help manage their numbers.
Posted by Shelly Cox at 6:58 PM