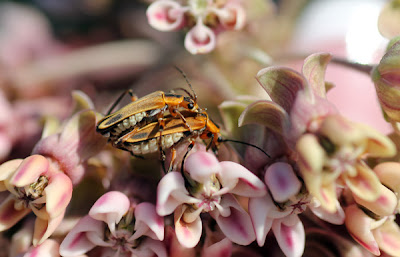 Margined Leatherwings (Chauliognathus marginatus) are a type of soldier beetle in the family Cantharidae. They are frequently found nectaring at flowers and will be seen covered in pollen. They are excellent pollinators because of their habit of crawling around deep in the blooms, this causes large amounts of pollen to collect all over their body which they carry to the next plant they visit. They also feed on some insects and insect eggs. The larvae are predatory and feed on many types of insects, and are especially fond of corn earworms and corn borers. Their range includes the central and eastern United States. They very closely resemble C. pennsylvanicus. The margined leatherwing has more black on their wings and are smaller than C. pennsylvanicus and the pronotum has wide dark band, instead of an irregular dark spot. Margined Leatherwings are more commonly seen in the spring and summer, whereas C. pennsylvanicus is associated with goldenrod and will be found in the fall to coincide with the blooming fall flowers. 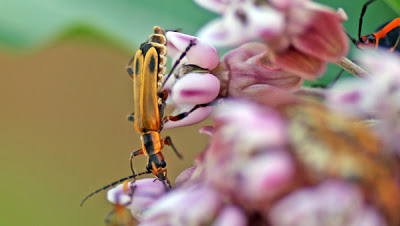 Soldier beetles are unusual among beetles because their elytra, while more hardened than the wings of most insects, are much softer than the elytra of most other beetles. These beetles are close cousins to lightning bugs and superficially resemble them.
Female soldier beetles place eggs in moist soil or in leaf litter in lawns, meadows, and forests.  Upon hatching in the summer, larvae live and feed at the soil level.  Most species pupate in the fall in small chambers in the soil and adults emerge in late spring, then mate and deposit eggs during the summer.
They hunt in leaf litter and in other locations that are damp and close to the soil.  A few species hunt under loose bark.  The larvae of other soldier beetles are herbivores that feed on potato, celery, and other garden plants.  As adults, some soldier beetle species feed on nectar and pollen, while others are predators that hunt for aphids and other soft-bodied insects.
Soldier beetles and their larvae are a food source for other animals.  Birds, bats, and spiders feed on the adults.  Spiders, ground beetles, and other soil-dwelling predators feed on the larvae. 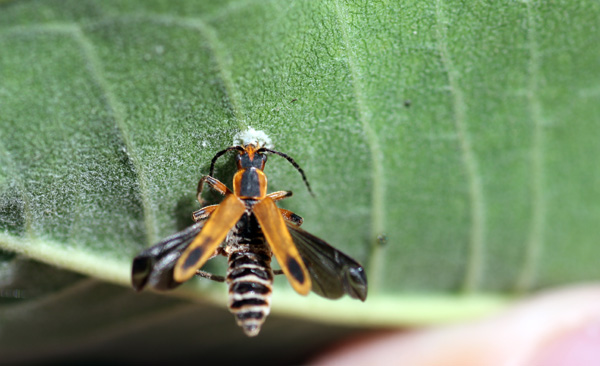 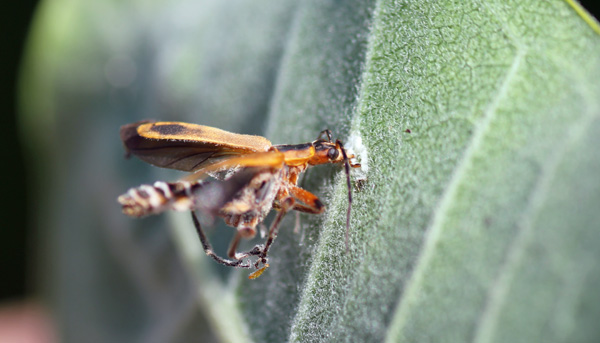 Today I found dozens of these beetles on the milkweed and many of them were frozen in animation....as if time suddenly stopped and and they departed planet earth.
A fungus is responsible for their untimely demise, and the following quote came from the book Medicine Quest by Mark J Plotkin.
"Though merely a cousin of the lowly toadstool, the Cordyceps fungus lives a life that could hardly be imagined by even the most creative science-fiction writer. Cordyceps lies quiescent on the forest floor, waiting for its unsuspecting insect prey to pass. When a bug wanders by, the fungus attaches itself to the insect exoskeleton. It then secretes a chemical that burns a hole in the insect's body armor. Next, Cordyceps inserts itself into the insect body and proceeds to devour all of the host's nonvital organs, all the while preventing the insect from dying of infection by secreting an antibiotic and a fungicide (as well as an insecticide to deter other insect predators). Once the nonvital organs are consumed, the fungus eats part of the insect brain, causing the insect to ascend to the top of a tall tree in the forest. At this point, Cordyceps devours the rest of the bug's brain, thereby killing the insect and causing the body to split open. At that point, the fungus can release its spores a hundred feet above the forest floor." !!! You can see in this picture how the fungus has left the beetle through the abdomen and will now be spread throughout the environment to attach itself to more beetles. In soldier beetles the fungus seems to cause the beetle to attach itself by the mandibles to the leaves of plants. The pathogen responsible for the death of these beetles may be Eryniopsis lampyridarum.


Mother nature is often without mercy and will use all sorts of devises to control population numbers.