My friend and fellow naturalist Shannon set out on a mission last week to rescue a wild honeybee hive that was found laying along the side of the trail at a local conservation area. Apparently recent storms had broken the hollow limb out of a tree and the hive became compromised when it hit the trail. It also put hikers and other nature enthusiasts at risk of stings as they navigated the trail. Shannon and some fellow master naturalist showed up at the conservation area with the mission in mind to remove the limb and take it to a friend of Shannon's that lives in Kansas. Working in 100 degree heat they cut the limb to a manageable size and hauled it nearly 1/2 mile back to the pickup. 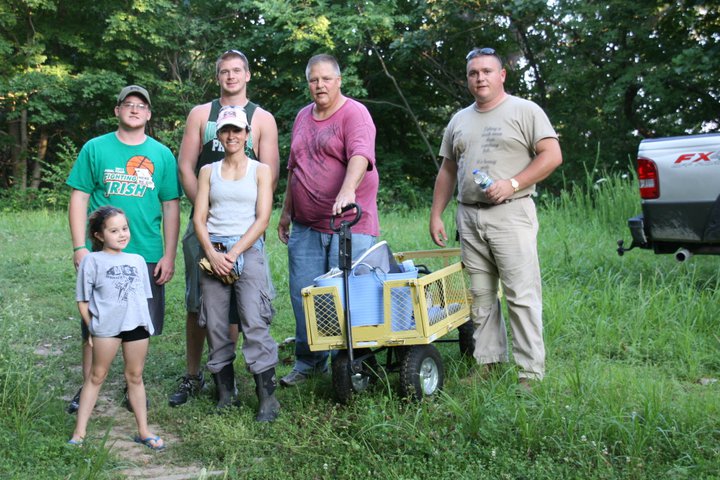 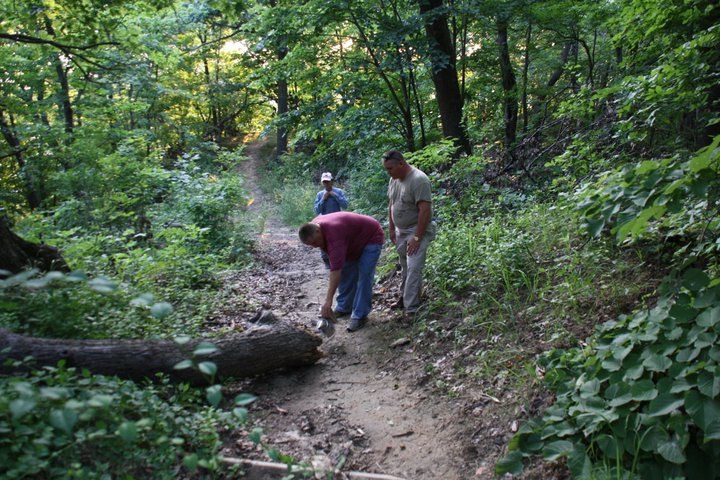 Shannon smoking the bees inside the limb. TJ (my supervisor) looking on, wonder what he would do if the bees suddenly flew out? 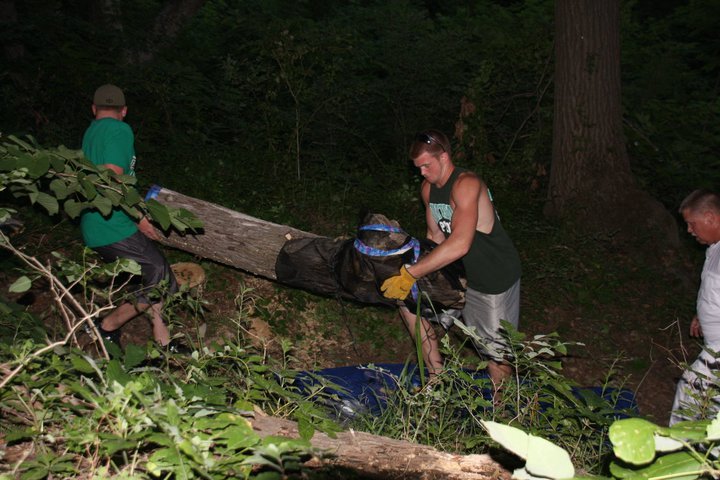 Carrying the limb out of timber and to the wagon that will transport it to the parking lot. One end of the log is covered in a black netting and the other end is sealed with duct tape.
Last night Shannon called me and asked me if I would assist him in trying to move the bees from the log to a hive box. I met him and John (fellow master naturalist) in Kansas at 8:30 this morning. After getting the smoker ready and donning our bee suits we proceeded to the log with the intention of splitting the log straight down the middle. I was to hold a piece of netting at one end, as Shannon smoked the opposite end. Theoretically the bees would move away from the smoke and into the net. Then the net could be closed up and transported the few feet to the hive where we would "dump" the bees into the hive. 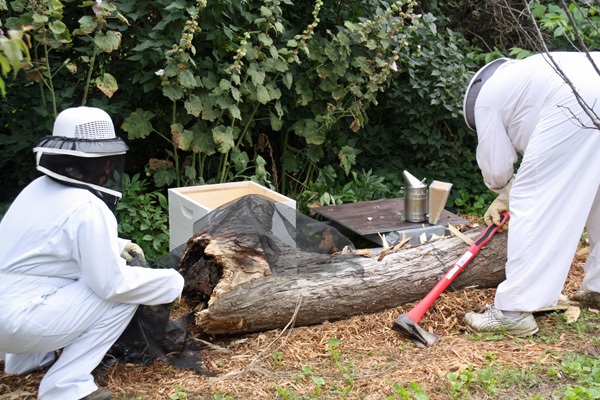 Things rarely go the way you intend, and this was no exception. It soon became apparent this idea was not going to work. The bees simply refused to be coaxed out of the log. The decision was made to split the log and remove the comb. We would then place the comb in the hive box and hopefully transfer the queen in the process. 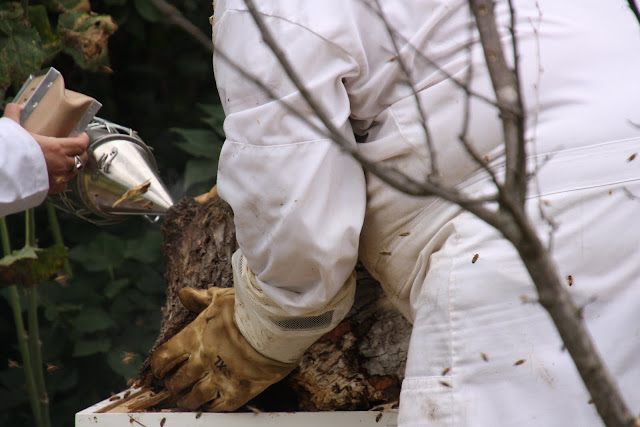 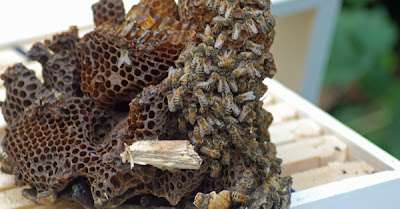 The wild hive is a thing of beauty. These bees are feral and part of a tame hive that swarmed at some point in past. They were very docile to work with. The workers were protective but not overly so, although they were seemingly crafty creatures. It was becoming increasingly difficult to determine where the queen was. Just when we thought we knew where she was based on where the bees were concentrating themselves, we would look over our shoulder to discover another large congregation of bees...was the queen there? Was she in the hive box with the first placement of the honey comb? There was an estimated 6,000-7,000 bees within this hive and divided into thirds it was difficult to figure out which group was guarding their queen mother. 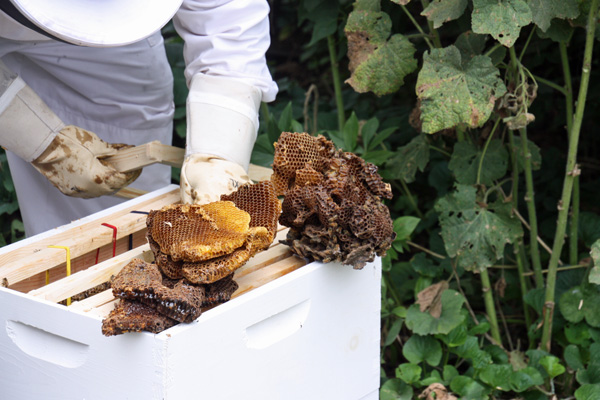 The beauty and intoxicating smell of the honey comb tempted me to try and sample the honey....OH MY...it was manna from Heaven! The BEST honey I have ever eaten! No wonder honey was referred to as the nectar of the Gods. There is no better tasting or purer food out there. Then consider that not a single thing must die to create it! Not plant, nor animal! 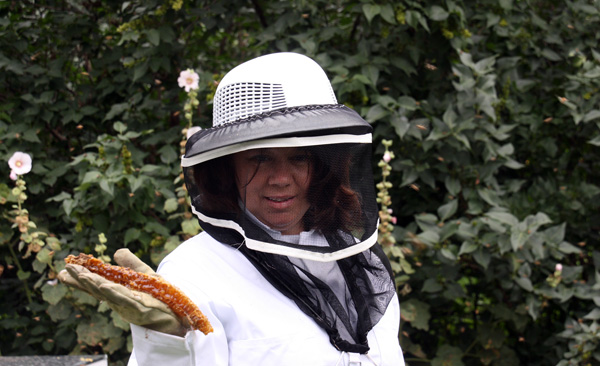 I seriously ate a fourth of this piece of honey comb......yes I have a sweet tooth. 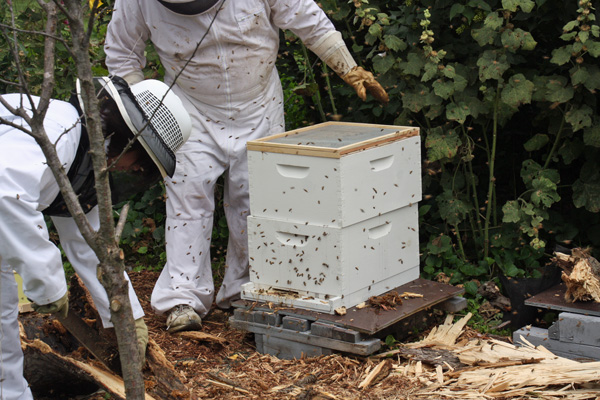 Once the log was completely split open the bees became very hostile at having their home destroyed. It is too bad we aren't able to communicate to them that we meant them no harm, we were merely giving them a mansion in comparison to the shanty they were living in. They swarmed around our heads and bounced off of us in warning to back off. I talked to them and assured them we were trying to make things better....they weren't listening. 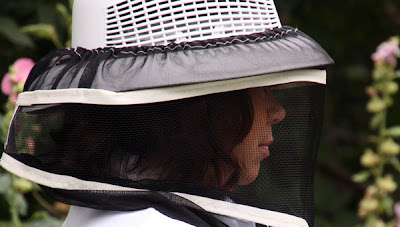 Once the hive had been taken apart and the honey comb was in the hive box we took the log away so they would not be tempted to enter it again. They began swarming on the ground and on a nearby tree so we still had no idea where the queen actually was. The decision was finally made to leave them alone and let them calm down. Shannon said he would check on them later in the afternoon or evening and see what they did. Hopes were high they would finally realize that the hive box was a good alternative. As of the writing of this post I do not know if they took up residence in the hive box, but I will keep you all posted as I find out.


UPDATE: Shannon checked on the hive Friday evening and again on Saturday and everything seemed okay. Then he remembered that we found some maggot-like worms wiggling around in the honey comb when we split the log open. He called and asked me if I could remember if they were fly maggots or wax moth worms. I honestly did not know, and hoped for maggots. I know wax worms can wreck havoc on a weakened hive. After doing some research on my own I contacted him and told him he better watch them closely because I felt they may indeed be wax worms. Sadly....he returned to the hive today (Sunday) and discovered they had swarmed and left. He looked the comb over and discovered several more worms and was able to positively ID them as wax worms. He found tell-tale signs of webbing that the worms leave behind as well. After such a rude disturbance and with the added stress of wax worms the bees did what bees do and left for the betterment of the hive. He was not able to locate the swarm, but he was hopeful that they had located a hollow tree in the nearby timber. With any luck they will make it through the winter.....Shannon has maintained a positive outlook and considers this a learning experience, rather than a waste of time as many people may view it. 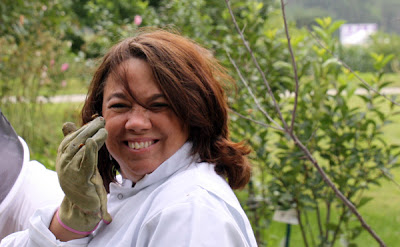