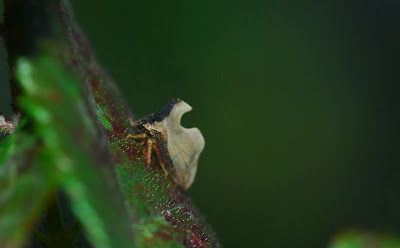 This interesting looking little insect is a Tree Hopper (Entylia carinata). They are very tiny, only  measuring approximately 1/4 of an inch. They can be a variation of many different colors, which apparently caused much confusion among early scientists. These early researchers believed each specimen to be a completely different species. Even if they were found on the same plant, feeding in the same manner. Many years passed, and much additional research has been done and we now know them to be the same species, just with color variants. The nymphs of tree hoppers will often be found with ants, these ants tend to the hopper nymphs, protecting them in exchange for honey dew. This honey dew is an excretion that the nymph produces from anal glands. It has a sugary-sweet taste that ants find irresistible.This relationship works well for each species. The little nymphs are protected from other insects that may wish to dine on them. The ants will chase of or harm any intruding insect. The ants get a sugary treat that gives them much needed nutrition.
Tree hoppers feed on a wide variety of herbaceous plants. Sometimes causing damage, if they are in large enough numbers.
Posted by Shelly Cox at 11:12 AM