Carolina Mantids are native to Missouri as well as most of the Eastern United States, Mexico and California. They are much smaller than the non-native Chinese Mantid. The maximum length of these mantids is approximately 3 1/4 inches. Whereas Chinese Mantids may reach lengths up to 5 inches. 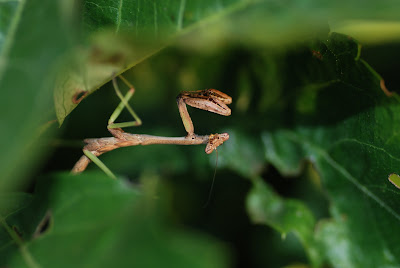 Carolina Mantids come in a variety of colors ranging from brown, green, and speckled brown. Their color camouflages them against the vegetation that they hang out on. This protects them from predation as well as allowing them to remain stealth and hidden from the prey they are seeking to feed on.

To tell the difference between males and females is pretty easy when you know what to look for. The female will have wings that do not cover her abdomen. She will also have a fatter looking abdomen for carrying eggs. The male will have much longer wings that generally cover his abdomen entirely, and they are much thinner in appearance. The antennae on the male is much thicker, presumably to allow him to pick up the scent given off by females ready to mate. 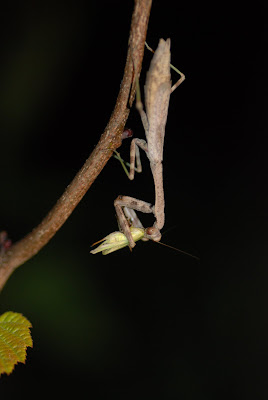 These insects are master hunters, they will wait patiently on plants, hidden, and quietly observing their surroundings. When a likely victim comes into range, the mantid will dart out with lightening speed and grasp onto the unsuspecting quarry. Their front legs are powerful, so once captured the poor victim stands little chance of escaping. The mantid will usually begin by eating the head off of the poor innocent insect, after all that is where the brains are located,  and one musn't waste those.  The mantid will eat every last drop, with exception to Moth and Butterfly wings, I guess there isn't much there. For us it would be compared to eating the feathers off a chicken......ppphhttteee, YUCK! 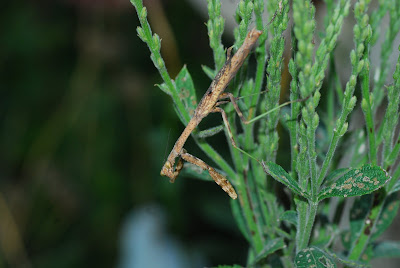 In late summer the female will begin "calling" for males. She does this by releasing pheromones (chemical perfume). This cocktail of perfumes is truly irresistible to the males of her species. They will come from great distances to mate with her. I know most of you have heard the tale about the male mantis losing his head while mating. While this is true in some cases, this isn't always the case. Sometimes the male just isn't preforming up to her standards, and to encourage him along she will chomp off his head. For some reason this turns him into the Don Juan of the insect world and he will mate with a vim and vigor to be envied my males everywhere. This also provides the female with extra nutrition, which will help her with egg production. If the male meets with the approval of the female, he may retain his head and his life to mate again. After mating, the female will lay her eggs within a foamy egg case that resembles styrofoam when it is dry. This egg case is called an ootheca. The eggs will overwinter until spring when the young will leave the safety of their styrofoam nest for the first time. Often times the first meal of these newborns will be their siblings. The most agile and strongest will survive. They feed on tiny insects. They are slow growing and will reach their full adult size by the end of the summer. 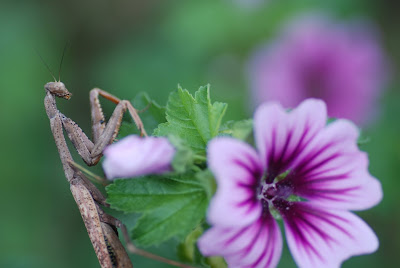 Praying Mantids can be found in a wide variety of habitats, including open fields, meadows, backyards, along roadsides, gardens, and prairies. Look for them most anywhere they can find insect prey to feed on. Their favorite foods seem to be moths, butterflies, and flies, but they will feed on a wide host of insects. Praying Mantids seem to possess a personality, they will follow you with their heads and eyes, always aware of your location. I've even had them crawl off a bush right onto my camera, and ultimately my face, as if they are curious as to why I am taking their picture. Let me tell you, it will give you quite a start to have one of these guys land smack-dab in the middle of your face. Like all insects that are predators, they have the ability to bite, but if handled gently this shouldn't be a concern. I've handled them many times and have never been bitten. They are easily kept as pets, a large jar with some holes punched in the lid, and a ready supply of insects, a light misting of the jar each day and you are good to go.