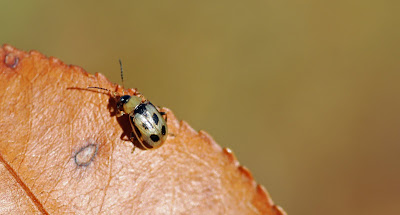 Bean Leaf Beetles (Cerotoma trifurcate) are very tiny beetles that pack a big punch. In large numbers these beetles can cause significant damage to bean crops, this is most especially true of soybeans. The main damage is to the leaves. They will also feed on corn or pumpkins. In the Midwest these beetles are becoming more common. As young grubs they will feed on the roots of their host plants, as adults they favor the leaves. They can vary greatly in color as adults, typically they will be yellowish, like the one pictured here, but they can also be red, or reddish-orange. There are four quadrangular black markings on their elytra (Wings), but this is not always the case, in some specimens these marks may be absent. The only absolute distinguishing characteristic of this beetle is a black triangle located at the top portion of the wing coverings where the wings meet the thorax. This mark is always present and separates them from other leaf beetles. The adults will overwinter in leaf litter or other ground vegetation. This will usually be alongside croplands that previously hand soybeans planted there. In the spring when warm weather returns they will become active and seek mates. After mating, the female will lay her eggs in clusters on top of the soil or near the soybean stems. The eggs will hatch in about 10 days. The grubs will burrow into the soil to feed on the roots of the soybean plant. They will live and feed in the soil for about 2 months, then emerge as adults. They are capable of 2 generations per year in most of their range. These beetles can be found from New Mexico and eastward throughout all the Eastern United States as well as parts of Southern Canada. If you notice these beetles on your plants, measures may need to be taken to apply chemicals to eradicate them. I find a few each year, but never in great enough numbers to justify applying strong chemicals to my plants that may endanger many other beneficial insects.
Posted by Shelly Cox at 1:02 PM