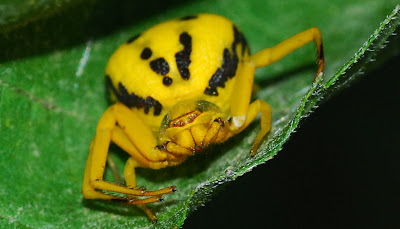 This past summer proved to be a good one for the crazy little crab spiders. These little spiders are so unique and fun to watch, that no matter how many times I find them hiding among the flowers I always am happy to see them. There are so many colors and patterns that each time I find one it is like seeing one for the first time. Just look at that face----what's not to love? 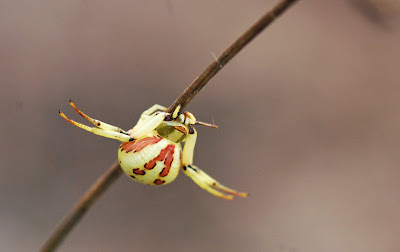 Crab Spiders get their name from their Crab-Like appearance. They hold those long legs out to the side just like a crab holds his front claws, then they complete the ruse by walking just like a crab. How cute is that? Yes, I said cute....... 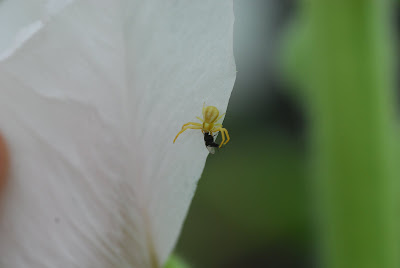 Crab spiders, like all spiders are efficient at insect control, just look at this tiny baby capturing that BIG ol fly all by herself! They will often capture prey much larger than would seem possible for them to handle. Imagine that a full grown crab spider, measuring 3/4 of an inch, legs and all. will capture a full grown butterfly!

Did I mention that they are masters of disguise? Just look at this pale colored crab spider hidden on the lambs ear. Doesn't he look the same color as the plant? They seem to have the ability to change their colors to help them blend in with their surroundings. There is some speculation as to whether they actually change their color, or if they just resemble the plants near where they were born. Some species reside on the ground and live in the leaf litter and vegetation, these will be colored like the dirt and leaves they live in. 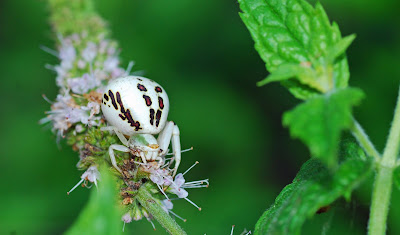 When these spiders are ready to mate, the male will offer up a juicy tidbit in the form of a fly or some other meaty insect as a nuptial gift. With any luck on the males part, she will dine on his gift and not him. After mating, the female will create an egg sac and deposit numerous eggs within this sac. They will emerge the following spring. The tiny spiderlings will be almost identical to their mother. They are so tiny when they are born it is next to impossible to see them, I once found one hidden on the spiny center of a coneflower, it was tucked away in between the spines, it was about as big as a large freckle. I'm still not sure what made me even notice it. 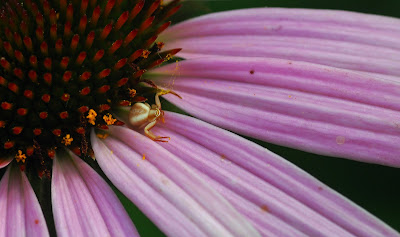 These spiders can look somewhat formidable, but they are completely harmless. Like any spider they have a certain amount of venom that they use to subdue their prey, but it would be harmless to humans. They are capable of biting, but would probably only do so if mishandled. 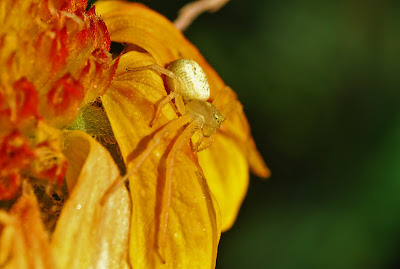