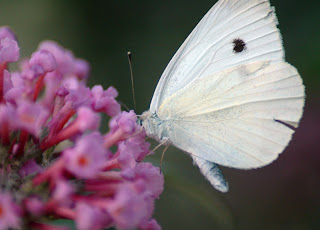 Image by Ron Hemberger via bugguide.net

Cabbage White Butterflies (Pieris rapae) are native to Europe, they were first discovered in the United States in the 1800's. They are now found throughout North America as well as Africa, Asia, and Australia. There is nothing spectacular about them, they do not have the gorgeous colors of some butterflies, or dynamic size, or gorgeous tails. What they lack in splendor they more than make up for in sheer numbers. It is not unusual to see large numbers of these butterflies puddling at mud holes, gleaning minerals from the moist earth. They are relatively small with a wingspan up to 1 3/4 inches. There are two color forms, one is white, the other is a pale yellow. The females will have two black spots on their forewings, the male only has one. There is some gray shading near the wing edges. They can be found in a wide variety of habitats, including vegetable gardens, flower gardens, parks, meadows, along roadsides, and open fields. In the spring males and females will engage in elaborate mating rituals. A male will approach a female, and if she has already mated she will show her lack of interest by their signature "Spiral flight". The two will rise into the air circling each other until the male loses interest and drops back to the ground. The female will then come slowly back down as well and begin egg laying. Look for this behavior in the summer months, since these butterflies are so common, observing this behavior shouldn't be difficult. The females use plants such as cabbage, turnips and radishes to lay their eggs on. The young caterpillars feed on the leaves of the plants. Sometimes much to the irritation of gardeners. Sevin Dust or removing the caterpillars by hand should eliminate any significant chance for the caterpillars to damage your produce. Or you can plant extra and share. Even though these butterflies aren't as spectacular as many other species, they are still a joy to watch fluttering around your flowers gathering nectar. 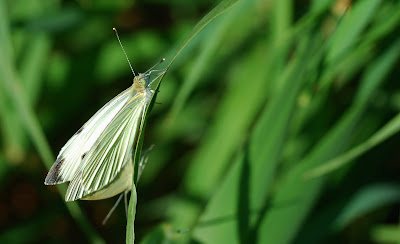 These butterflies are easily reared in classrooms, or as a 4H, or home school project. They will readily feed and pupate in captivity. It takes approximately 3 weeks for them to complete their life cycle.

And what's a butterfly? At best he's but a caterpillar at rest. -John Grey-