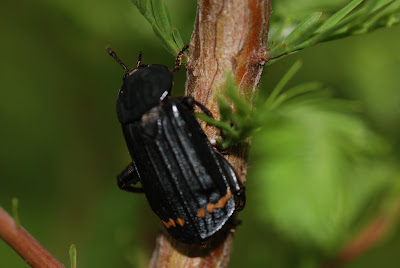 Red-Lined carrion beetles (Necrodes surinamersis) are large beetles that measure up to 1 1/2 inches.They are all black with a red line at the base of their elytra (wings), from whence they get their name. This line may look more orange rather than red in many specimens, such as the one pictured here. Red-Lined Carrion Beetles are found throughout the Eastern and Central portions of the United States, also including Montana,Utah and the Pacific Northwest. When it is time to find mates the adults will breed on dead carcasses. The eggs are laid in the soil near the carcass and after hatching the young larvae will feed on the dead flesh or the maggots that are on the carcass. When the larvae reaches full size it will drop to the ground and pupate in the soil. The adults will overwinter in leaf litter. These beetles can be found in almost any habitat that contains a dead, or decaying carass. They seem to be particularly fond of bird carcasses. As people we take for granted (or we don't give it a thought at all) the decomposition of dead or decaying animals that meet their demise. If it weren't for beetles such as these and many other creatures that survive by consuming these stinky, rotten bodies it wouldn't be long before we would be overrun in nasty dead flesh. We should give thanks that these beetles do what they do!
Posted by Shelly Cox at 12:07 PM