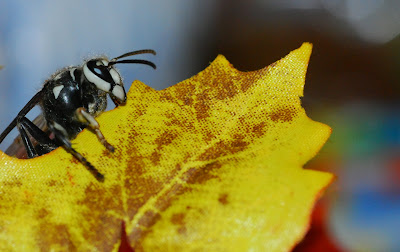 It seems that no other insect instills such automatic fear as a hornet. The Baldfaced Hornet (Dolichovespula maculata) is found throughout North America, and Southern Canada. The only exception to this will be the drier areas of the Midwest. These large wasps are not really hornets at all, they are more closely related to Yellow Jackets, and are even sometimes called Baldfaced Yellow Jackets or Aerial Yellow Jackets. Late in the summer the queen will begin laying eggs that are destined to be fertile males (drones) and females. When the larvae of these fertile offspring reach maturity, they will seek mates. Soon after mating, cold weather begins to set in and the hive member will perish, all except the new queens. These new queens will seek sheltered areas to spend the winter, commonly this will be in the soil, under bark, or dense leaf litter. In the spring with the return of warm temperatures these queens awaken and become active. Their only purpose is to locate a suitable site to begin nest building and egg laying. She will fashion a circular shaped nest, that she creates by chewing up bits of wood mixed with starches in her saliva. Within this nest she form cells, and begins depositing eggs within each cell. She will care for these offspring herself, by feeding them chewed up bits of insects. Once these larvae have matured they will be the future workers of the nest and will take over the chore of expanding it and caring for the queens offspring. As the nest expands it will take on its more famous "Football" shape. Some of these nests can get quite large, reaching lengths up to 3 feet! 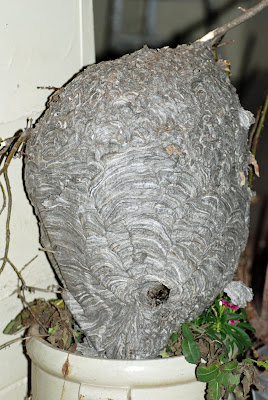 (The nest pictured here was found by my son and his boss yesterday. My son called me and asked how the best way was to get it out of the tree, where it was located 40 feet above the ground. I suggested shooting the branch it was on, and catching it before it could be smashed against the ground. I felt pretty certain that the extremely cold nights and cooler days we'd been having for weeks now would guarantee that the members of the hive were either dead or very close to it. He was a bit worried about the small chance that remained that there could still be active hornets in that hive. He found his courage, shot the nest out of the tree, put it in the truck to bring back to his bosses place. After placing it in the truck, near the heater, you can almost guess what happened next.....yes....after warming up,the ones that remained in the hive crawled out! My son drove to his bosses farm, opened the truck door and kicked it out! LOL He then called me and informed me where it was at, and if I wanted it I COULD GO GET IT!  So I retrieved the nest and brought it home. I was shocked to discover just how large this nest was. It was easily 20 inches long and had a diameter close to a basketball in size.  I peeked into the hive and noticed a very rancid smell of dead and decaying bodies. Most of the hive had long since perished. The few hardier ones that remained were moving very slow and were near death themselves. The one pictured here I was able to handle and photograph, but I am certain she isn't long for this world.)

Towards the first part of the summer as the nest is growing and the population of hornets is expanding these wasps can pose a potential threat to humans. Coming too close to the nest will irritate these hornets and you may find yourself under attack by an angry swarm of these over protective wasps. A hive may contain up to 700 individuals. That is a lot of stinging hornets! They are capable of repeated stings as they do not have a barbed stinger that becomes detached like honey bees do. Away from the nest they are no more dangerous than any other stinging insect. They are more focused on gathering food for their siblings, queen and themselves. As long as you do not swat at them or otherwise antagonize them you have nothing to fear. Make one mad however, and there are no guarantees. If one should get angry enough to sting, rest assured you may be faced with many more of her sisters all bent on attacking and coming to her defense. They possess a pheromone (Chemical perfume) that they emit when in danger or feeling threatened, other members of the hive can smell this cocktail of chemicals and will come to aid their sister.
Over all these wasps are more beneficial than harmful and should be left alone if at all possible. They kill and consume thousands of harmful insects that they feed to their siblings or consume themselves. Obviously if one of the queens decides to set up her homestead in our backyard; safety measures will need to be taken to have the nest removed. If you should happen to get stung, the best remedy for relief is baking soda, it will help reduce swelling. 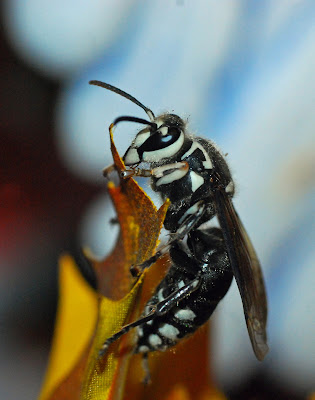 Identifying these large wasps is easy. They  are all black with yellow or white markings on their face, thorax and the last few segments of their abdomen. The males will have an added yellow or white marking on the first abdominal section. Males do not possess stingers, so therefore they cannot sting. Queens are quite large and may measure up to 2 inches, female workers are closer to 1 1/4 inches. They just have a "Bad-Ass I'm in charge" kinda look about them.
In Missouri they will begin dying off around the first of November, maybe sooner if the temperatures are cold enough (like this year). If you wish to hunt for these fabulous nests and collect one....make sure the hive is abandoned or all the members have perished......plan ahead, they often build very high in trees and you need a safe way to remove it.....make sure you have permission to be on the ground where you are hunting for the nests......waiting until late fall when the leaves are off the trees and wasps are gone is the safest course to take.
It always seems like such a waste to me that these wasps work so diligently and hard all season to produce a work of art, to only die and leave the nest behind. Rarely if ever do future generations use previous nests. Time and weather will eventually destroy them, so if you are fortunate enough to find one, and can safely collect it I say do so. They are wonderful conversation pieces and great educational tools. 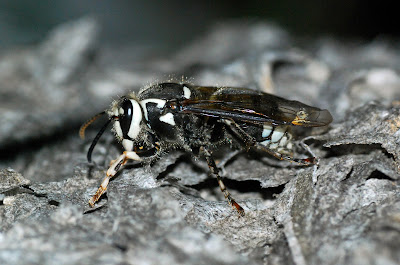 Rest assured, next spring when those bred queens become active, the cycle will begin again. 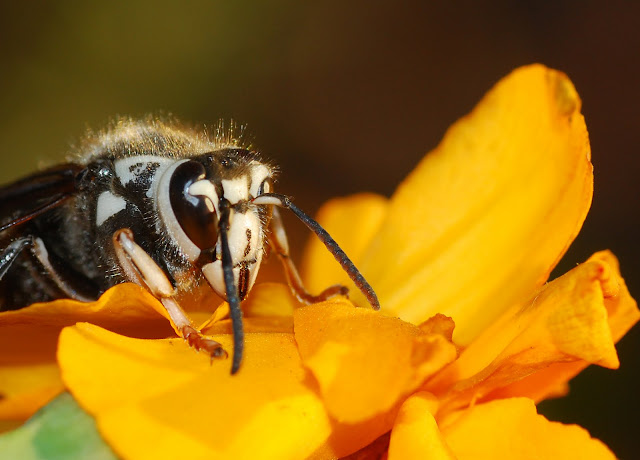 I for one feel fortunate that we have these amazing, engineering masters in Missouri.