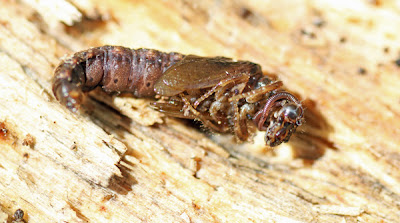 This odd, alien-looking thing has created quite a mystery. Ted MacRae took a look at it and his best guess is the offspring of a beetle in the Carabidae family. I found several bombardier beetles in the same log so I suspected he could be right and this is the larvae of one of those beetles. There is some kind of millipede-looking thing wrapped around its neck (if it had an actual neck). James Trager felt it was antennae. Ted said there was no known beetle with that many segments on its antennae. I decided to submit it to BUGGUIDE.NET  and see what they thought. Ken Wolgemuth took one look at it and said it was the pupa (not larvae) of a Megaloptera. He had a picture as an example and I had to admit it looked spot-on. He also said that the millipede-looking thing is indeed antennae. Then Brady Richards said he found one just like it in a decaying tree near a stream and said it is most likely sp. sialis.  Since this odd little creature was also found in a tree, near a pond in the woodlands, the Megaloptera makes the most sense. The closest match seems to be some sort of fishfly.

WOW! So much confusion over one little invertebrate. It just goes to show it takes a lot of research and thought to figure some of these things out, especially when they are in the larval or pupae stage. I personally thought it was a beetle larvae and agreed totally with Ted's opinion. Turns out James was right and it is antennae wrapped around its neck.
I think this larvae was probably already nearly dead and other inverts were taking advantage of the unfortunate untimely death of this young fishfly baby. It wasn't long and those aggressive meat-eaters the Spiny-waisted ants moved in an began dragging this creature to their lair, to dismember it and pass around the pieces like Aunt Mabel's fried chicken. 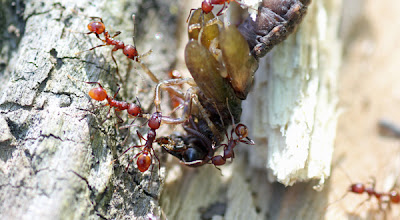 Ants are one of the most opportunistic of all the invertebrates. They will not turn down the availability of food, no matter what form it takes. They cooperate and work like trained soldiers in unison. In one image (Below) you can actually see some of the ants pulling, and some of them pushing this heavy load in complete cooperation. It got a look of amazement out of me.

Ants on the left PULL!  Ants on the right PUSH!
This is the ultimate in teamwork. 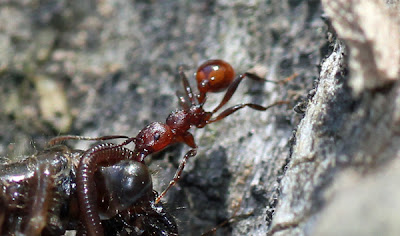