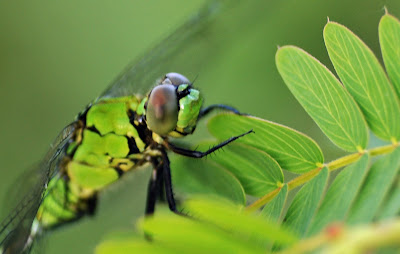 This beautiful green dragonfly is the Eastern Pondhawk (Erythemis simpliciolis). They are primarily a species of the Eastern United States. They are found in the Great Plains States, Texas as well as a few isolated populations in Arizona and New Mexico. They are an average sized dragonfly  measuring up to 2 1/2 inches. With their all over green coloring they are easily camouflaged against vegetation near the waters edge. 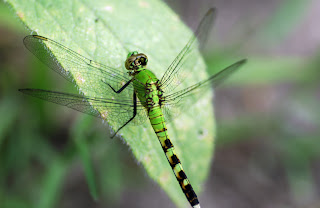 They are typically associated with ponds or lakes, but they will also be found along creeks and slow moving streams. They are commonly found flying around meadows and open fields where they are looking for insect prey. They will dart after some delicious-looking insect and snatch it up with their powerful legs. Sometimes they will carry it back to a perch and feed, but more often they will feed while in flight.

This dragonfly also goes by the names of Green Jacket or Common Pondhawk. These are probably one of the most easily found and observed of all the dragonflies in Northwest Missouri. I come across them quite frequently, and I am always excited to see them.