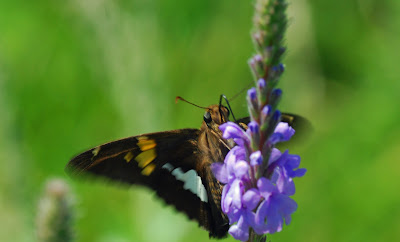 Silver-Spotted Skipper (Epargyreus clarus) is one of the largest skippers in North America. They are found throughout most of the United States with exception to western Texas and the Great Basin. These pretty butterflies are probably one of the most commonly seen of all the butterflies in most of their range. In Northwest Missouri, they are extremely plentiful and we begin seeing them about the end of April. They can easily be identified by their silvery-white band on their underwings. The upperwings are predominately brown with some burnt-orange markings of the forewings. They have a wingspan up to 2 5/8 inches. 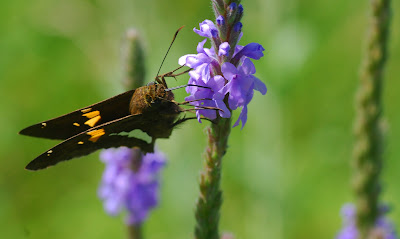 After mating, the females will lay their eggs near a wide variety of host trees, including Black Locust, Honey Locust, False Indigo, and other Woody Legumes.  The caterpillars must seek their own host tree. The young caterpillars will live in shelters made of folded leaves, and older caterpillars will live in silked-together leaf shelters. Once they reach full size they will form a chrysalid and overwinter in this stage. The following spring the new butterflies will emerge. 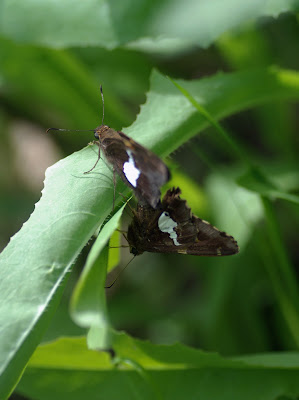 They can be found in a wide variety of habitats such as open woodlands, fields, along roadways, in gardens and along stream sides. The adults seem to prefer flowers with hues of red, blue, pink, purple and sometimes white or cream colored. They are often seen nectaring at thistle, red clover, milkweed and a whole host of others. At night the adults will perch up side down underneath leaves, they can also be found in this position during the hottest days of summer as well as rainy/cloudy days. 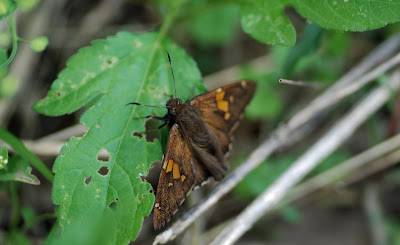 I am so ready for the return of spring, all those pretty butterflies, and the warmth of sunshine.