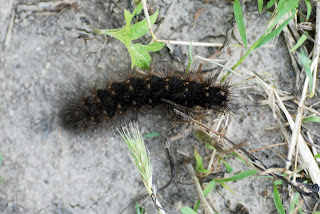 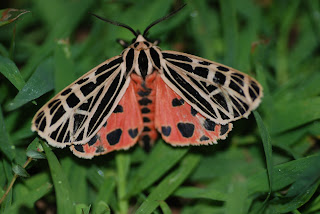 These two images are of the "Virgin Tiger Moth" (Grammia virgo). They are found in scattered populations throughout the Eastern and Southern United States. They are a relatively large moth with a wingspan of up to 2 1/2 inches. The fuzzy caterpillar is all black with rusty undersides. There are spiky hairs sticky up all along its body. This caterpillar would be a contender for the racing circuit. I've never seen a caterpillar move as quickly as this one did. In fact it startled me when it first took off, it was a completely unexpected response to being discovered. By the time I recovered and quit laughing at the absurdity of a "fast" caterpillar. I found it several feet away under some dense grasses. After much difficulty I managed to get it out of the grasses and to a place for a photo. The adult is striking in coloration. The upper wings are black and cream patterned, the hindwings are orangish-red or pink in color with black blotches. Thier typical habitat is forested edges, or deciduous woods. They will come to lights at night. Adults sip nectar, and the caterpillar can be reared on a variety of plants, including bedstraw, lettuce, plantains, clover and other low growing vegetation. The female will lay her eggs in clusters on a host plant. The newly hatched caterpillars stick close together until they mature. It is at this point they lead a solitary life and overwinter in a sheltered area. In the spring they become active again (like the one pictured above) and begin feeding. After a couple of weeks they will form a cocoon and later in the spring or early summer they will emerge as an adult. When disturbed the adult can release a chemical from their body, it bubbles out from around their eyes and head. This liquid is made of up of distasteful chemicals gleaned from the foods they consumed as caterpillars. This gives them protection from predation, as they taste bad to a would be predator.
Posted by Shelly Cox at 9:42 AM