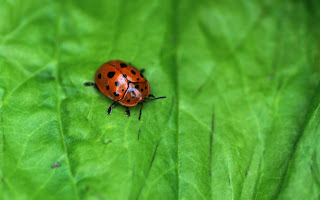 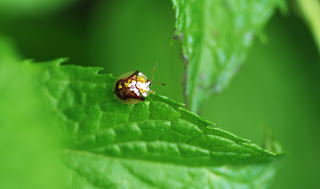 These shiny bright be 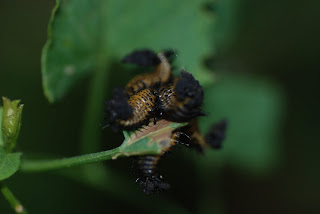 etles are tortoise beetles. The first is the Argus Tortoise Beetle (Chelymorpha cassidea). The second is the Mottled Tortoise Beetle (Deloyala guttata). Both are found throughout the Eastern portion of the United States. The Argus Tortoise beetle has a broader range and is found throughout most of the United States, but it is probably the only species of that genus in the Eastern part of the U.S. The name Argus comes from the mythological creature "Argus" which was a 100-eyed Greek monster.
The Argus is often mistaken for lady beetles, and it is obvious why. With that bright reddish coloring and black spots it is very similar indeed. They grow to be about 1/2 inch which is much larger than the typical ladybug. They can be variable in their coloration, ranging from yellow, orange, red to a reddish-orange. There will be six black spots on the pronotum and on each wing. The edges of the wings are transparent. The natural habitat for these beetles is open fields, gardens and meadows where they feed on morning glory and milkweed. After mating, the female will lay clusters of 15-30 eggs on the leaves of the host plant (morning glory or milkweed). After hatching, the young larvae will feed on the leaves and carry their frass (poo) around with them on their backs. (picture 3) one can assume this gives them some protection from predation, after all who wants to eat poo? Once full sized they will drop from the plant and burrow into the ground and pupate. They will overwinter in this state. The Mottled Tortoise Beetle is much smaller than the Argus at around 1/4 of an inch. These beetles look like pieces of shiny gold on the leaves of plants. The wings are mottled with black, yellow and shades of reddish brown with a metallic gold tint that shines in light. The edges of the wings are clear like the Argus. Both species have a flattened appearance. Adults of the Mottled variety overwinter in leaf litter or under bark. In the spring they emerge and mate. Females lay eggs in clusters of up to 30 eggs on the leaves of host plants, in the case of this beetle it is sweet potato and morning glory. In about three weeks they will be ready to pupate. They will drop to the ground and burrow underground to complete their lifecycle. In about one week their cycle is complete and the adult will emerge. I have wild morning glory behind my house that comes up voluntarily in my herb garden. These beetles are always on the vines. While I admit to not being too fond of morning glory vine, it has a tendency to take over and choke out other plants. I pull it and it seems to come back the next day. I leave some of it for these beetles, simply because I like them.
Posted by Shelly Cox at 9:38 AM