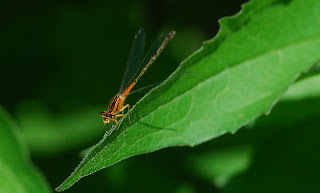 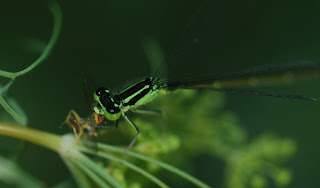 These damselflies are the Eastern Forktail (Ischnura verticalis). They are found throughout the Eastern United States as well as parts of Southern Canada. They are very common in Missouri. They are often found basking in the sun on woodland trails. I have them in our backyard garden near our goldfish pond. These seem to be the most plentiful damselfly that I see in our yard. The males and females look entirely different. Both are approximately 1 1/4- 1 1/2 inches in length, but that is where the similarities end. Females are a light grayish-blue with black markings that are usually very faint. In some specimens the black markings may be non-existent. They have pale blue eyespots. Immature females are bright orange with black dorsal and shoulder stripes (picture # 1). The male is a beautiful creature with black thorax and green shoulder stripes and green sides. The abdomen is black with a Bright blue tip. Their eyes are dark above, greenish below and contains a small green eyespot. They feed on small insects, like the male pictured here which is feeding on a syriphid fly. I watched as he slowly flew over the top of the fly, completely unnoticed by the poor victim. In the blink of an eye the damselfly captured his dinner and landed on a nearby leaf and began feeding. The offspring of this species is aquatic like all damselflies. They feed on other aquatic insects. Eastern Forktails prefer small heavily vegetated ponds or other similar bodies of water. Which is probably why they like my yard so much. There is something to be said for overgrown gardens...the insects love them!
Posted by Shelly Cox at 9:54 AM