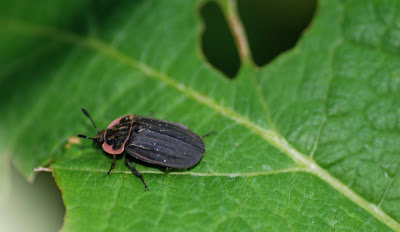 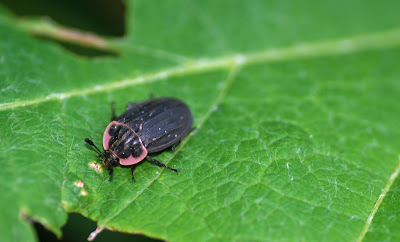 This was somewhat of a surprise the other night. This little carrion beetle was sitting on our grapes. Still not quite sure why it was there, seemed like an odd place for a carrion beetle to be. The Margined Carrion Beetle (Oiceoptoma noveboracense) is found throughout the Eastern United States with exception to Florida and can also be found in Texas and Louisiana. Another similar species the American Carrion Beetle is bigger and the pronotum is greenish-yellow instead of pinkish-red. The margined carrion beetle grows to about 3/4 of an inch. They are commonly found near deciduous hardwood forests. This little guy was far from home, the closest timber was 8 acres away. Carrion beetles are not the most pleasant insects in the world of bugs, but they certainly perform one of most important services to mankind. They are the clean-up crew. Not only do many species of carrion beetles either in the adult or larval stage feed on decaying carcasses, they also help control insect pest populations. This is done by the habit that many species of carrion beetles have of feeding not on the carcass itself, but on the maggots of the flies that are there to feed. This species is known for such behavior. The adults will sometimes feed on maggots. The larva feed on maggots, decaying fungi and carcasses. The female will lay her eggs on the unfortunate corpse. The young larva will feed on the carcass or the maggots for as long as the food source lasts. Eventually they will fall to the ground and dig themselves an underground chamber. Within this chamber they will pupate and finish their life cycle. The female will continue to fly from carcass to carcass laying eggs and feeding. The very flattened design of their bodies is no accident. This flattened, flexible body allows them to maneuver under dead bodies. While the thought of eating dead flesh is revolting to us humans, fortunately for us carrion beetles thrive on it. Try to imagine a world overrun with rotting stinking dead flesh and no beetles to help in the disposal of the offensive mess. Plus we get the added benefit of nutrients being released back into the soil from the feeding habits of these beetles. Forensic scientists use these beetles as a means of determining the time of death of human corpses. They can often times figure out the time of death just by the beetles or other insects present on the carcass. As each individual species will show up at very specific times to feed in very specific ways. Some are attracted to the carcass itself, still others are attracted to the insects present on the body. Some prefer fresh (if there is such a thing)dead flesh, still others prefer their meat a little putrid. Timing is everything when determining how long a body has been dead. I would say look on dead or decaying animals to find these beetles, but obviously grapes will do in a pinch?
Posted by Shelly Cox at 10:04 AM