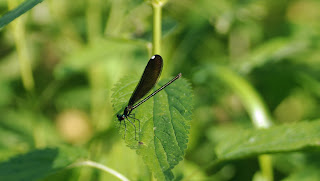 These gorgeous damselflies are called the "ebony Jewelwing" (Calopteryx maculate). These are one of the most colorful of all the damselflies, as well as being larger than most of the damselflies we see in this area. The males have iridescent blue or green bodies and jet black wings. The females are a little duller in appearance and have two distinctive white tips on their wings. The first picture above is of a female, notice the little white tip on her wing. The second picture features the male. They reach lengths of up to 3 inches. 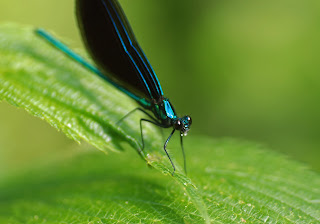 Like all damselflies they are predators and prey on other insects. Because of their smaller mouths they typically feed on small insects and small spiders. The larva of this species is aquatic, and they feed on aquatic insects. Look for them in timber edges, usually near a water source. Timber creeks are a great place to find them. These are fairly easy to approach providing you move slowly and quietly. They do not stay in any one place very long and flit about a lot. These are common throughout Missouri as well the Eastern 2/3 of the United States. Many creatures including frogs, birds and spiders will prey on these jewels. In their aquatic stage as nymphs they are preyed upon by turtles, fish and large dragonfly nymphs. Mating occurs in the summer, the male will grab the female behind the neck with his tail (end of his abdomen). After mating, the female will lay her eggs in the soft stems of aquatic plants. The eggs hatch into larvae called naiads. They live an entirely aquatic life until it is time for them to leave their watery bed, they will then crawl out of the water and grab hold of a stem and shed their exoskeleton. Once their wings dry out they will take flight for the first time.
Posted by Shelly Cox at 9:14 AM