Candy in the Garden 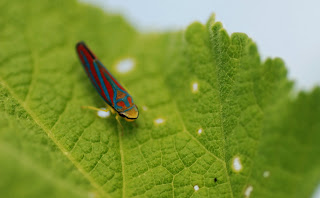 This "cute" little bug is the Candy-Striped Leafhopper, or the Red-Banded Leafhopper (Graphocephala coccinea) as it is also called. They are common throughout most of the United States. I've already seen several this year, including the one pictured here which was on a Hollyhock plant. They are tiny at barely a 1/3 of an inch in length. Their coloring is what is so spectacular about them. They have green wings, and thorax with red stripes and yellow head and legs. They look like a tiny candy colored wedge sitting on your plants. They are found in gardens, prairies, roadsides, meadows and open fields. They feed on a wide variety of grasses and plants. They rarely cause damage as they usually do not occur in large numbers in any given area. Although if for some reason an infestation of these leafhoppers were too occur, significant damage could be the result. After mating, the female will puncture the leaves of plants and deposit her eggs. They are capable of producing up to three generations per year. Leafhoppers produce "Honey Dew" from their anus, ants are attracted to this sweet substance and will sometimes be found caring for the leafhoppers in return for the sweet addicting nectar.
Posted by Shelly Cox at 10:35 AM