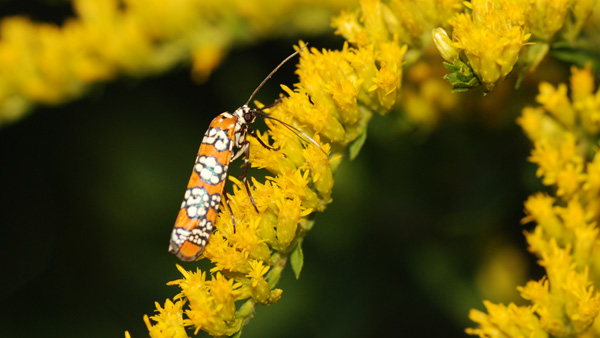 This tiny, brightly colored moth is the Ailanthus Webworm Moth (Atteva aurea) , these moths are often mistaken for beetles at first glance. I'm sure this comes from their day-flying habits, their small size and their oddly marked wings. This time of year they are often found on the goldenrod (as pictured). They stand out beautifully against the yellow flowers.

These moths are not native to the United States, they came from Central and South America. There is some speculation that they may be native to Southern Florida. This moth has adapted so well and expanded its range in large part due to a plant called "Tree of Heaven" (Ailanthus altissima), It is the genus name of this plant that these moths are named after. Tree of Heaven originally came from Northern China, but so closely resembles in chemical makeup the plants this moth typically feeds on in its larval stage that they use it almost exclusively as their host plant. Tree of Heaven has spread its range exponentially. This plant was used in Europe as an exotic garden species in landscaping and spread rapidly during the 1700's. It wasn't long (1784) before it followed immigrants over to North America where it can now be found in fence rows, waste ground and along roads. This tree may reach heights up to 50 feet and is a short lived species, rarely living more than 45 or 50 years. In China and Taiwan it was used extensively in medical treatments for anything from Mental illness to baldness. There are still people who use the tree today, but mostly as an astringent. For many years this tree was used in this Country by gardeners, and parks departments to beautify backyards, parkways and city streets. It wasn't long before it lost favor among these people for its terrible odor and invasive habits.

This tree gained fame in Betty Smith's popular book "A Tree Grows in Brooklyn". This tree was a metaphor for all the immigrants coming into New York City during the 1700 and 1800's. The tree was non-native, hardy and established itself well to its new environment. Much like many of our ancestors have done over the past several centuries.

The Ailanthus moth just followed the plant around the country and has become established in most of the United States. They most likely do not survive the coldest northern regions of its range. The summer residents migrate from the south and spend the warmer months in those extreme northern regions, such as Canada. When cold weather returns these moths die. Next season they will repeat the process.

These moths are considered pollinators. The adults are fond of plant nectar and visit flowers often. They carry pollen from flower to flower as they feed. The female lays eggs on the Ailanthus trees and when the caterpillars are hatched they will feed on the leaves. They spend the day in rolled up silken chambers attached to leaves. They will also pupate inside these webby cells. It is this web that the term "Webworm" came from.

Fortunately the Ailanthus Moth goes wherever the plant goes and helps control the further spread of this plant.
Posted by Shelly Cox at 9:23 AM