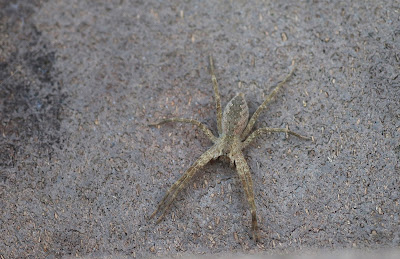 The nursery web spider (pisaurina mira) is a common spider found throughout the United States and Canada, but is more common in the Eastern portion of its range. They are large spiders with a leg span well over 2 inches. They are highly variable in coloration and may be tan, yellowish or gray. There is a darker midline stripe that runs from the eyes through the cephalothorax and across the abdomen. The stripe on the abdomen is outlined in white. The eyes are distinctive in identifying this species. The bottom row of eyes are in a straight row, and the upper row of eyes have a deep upward curve. They rest with their front legs close together, outstretched in front of them, like pictured above. 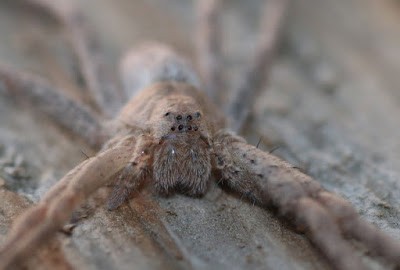 I encountered one of these spiders on my front porch the other night and it behaved in a very strange manner. It literally bounced, or hopped in a very erratic, rapid fashion and hid underneath the step to our hot tub. I coaxed it out and it hopped a few feet away and when I moved in front of it, it stopped and then raised one hind leg. It repeated this behavior several times.....hop...hop...hop....stop, then raise a leg. Not sure why it acted like that, if it was some bizarre defense behavior, or if this was an odd behavior that this particular individual exhibited for some unknown reason. 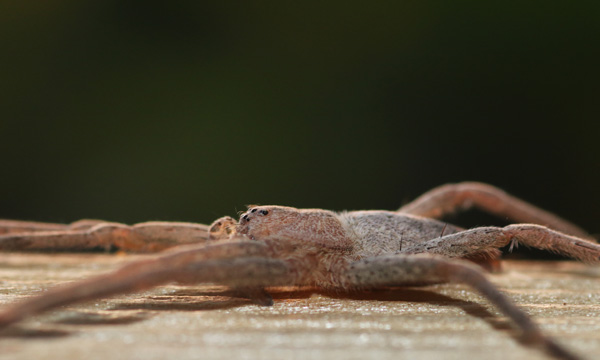 You will find these spiders near woodland edges, in open grassy fields, meadows and near man-made structures. They are wandering spiders and actively seek insect prey. They may also be found near lights at night, and one could assume these are the opportunistic hunters.

Mating takes place while suspended from a dragline of silk that the male uses to approach the female.  The male will bind the front legs of the female together with silk then offer her a fly. If she accepts the fly; mating will take place. During copulation the female will devour the fly instead of him....so the fly is most likely a decoy to distract the female while he passes his genetics on. After mating, the female will produce an egg sac that she carries around with her in her chelicerae. When the egg sac is ready to hatch, she will create a nursery web in a low lying bush or in tall weeds. The egg sac will be placed safely inside the nursery web where the spiderlings will emerge. The spiderlings will remain in the nursery for a week or so while mom stands guard protecting them from predation.

The name "Pisaurina" is the feminine version of Pisaura, and "mira" is Latin for astonishing or wonderful. Eugene Simon bestowed this name upon the spider in honor of Pesaro River in Italy. 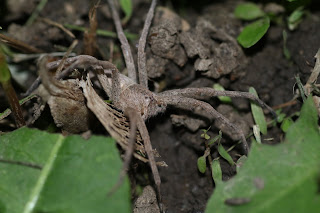