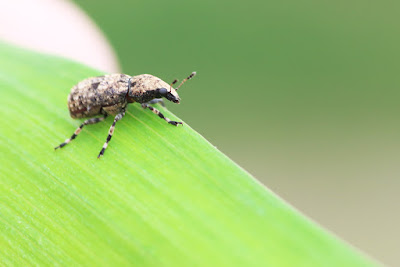 While outside walking around my yard yesterday evening I noticed a weevil clinging to the side of our metal garage. I tried photographing it, but could not get the photos to come out, so I moved the weevil to a blade of grass and snapped a few pictures.

Beyond being a weevil, I had no idea what this beetle was. I posted the picture to facebook and in no time my good friend Eric Eaton at Bug Eric was able to ID it as a fungus weevil. That gave me a place to start in getting a positive ID to species and I began my search on bugguide.net. In no time I found a perfect match of Marbled Fungus Weevil (Euparius marmoreus). They range throughout the Eastern United States to Montana and also Arizona.

Weevils in the family Anthribidae are classified as the fungus weevils, they typically have longer antennae than other weevils. Most antennae of weevils have elbows, but the fungus weevils do not. This sets them apart and aids in identification. The marbled fungus weevil is blotchy in appearance in shades of tan, brown and gray. There is a black eyeline from the snout, along the side of the face to the elytra. They are relatively small at 3 to 8 mm in length.

As adults they feed on fungus, and decaying plant matter. As grubs they feed within decaying logs, trees and other wood, especially elm.This one was hanging out on the side of our garage no where near any rotting or decaying wood. So it was a little out of its normal environment, and I'm not quite sure what it was after there, unless it was warming in the sun for some reason. 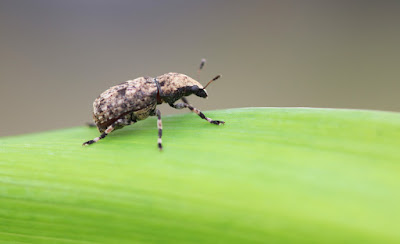