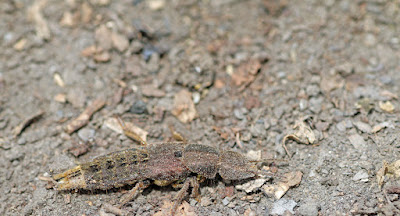 While flipping rocks today at the farm I found this large rove beetle. At first I thought it was the Gold & Brown Rove Beetle (Ontholestes cingulatus) and tentatively ID'd it as such on Facebook. My good friend Eric Eaton over at Bug Eric corrected me and supplied the correct ID as the Brown Rove Beetle ( Platydracus maculosus). He assured me that these two beetles are often mistaken for each other. I must admit they do look very similar. The P. maculosus is larger and often found under leaf litter, rocks, logs, carrion, etc. whereas O. cingulatus will be found more often in or around fungi. Both may occasionally be found near lights at night. 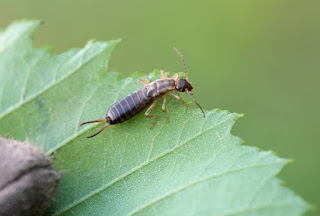 The Brown Rove Beetle is common throughout much of the United States, but especially in the east. It will also be found in parts of Canada. They are dark brown covered in golden hairs, with a series of darker spots that run down the center of the abdomen. They have blue underwings that give them the appearance of a wasp when in flight. Their wings are short and barely extend onto the abdomen. They are sometimes mistaken for earwigs and at least superficially they resemble them.


Pictured above right is an
earwig for comparison

When alarmed they will curl the tip of their abdomen up and over their back and move erratically to escape potential threats. They move rapidly and are often very difficult to photograph and this one was no exception. It took quite awhile to manage a couple of decent images before I finally gave up and it disappeared underneath another rock.

As larvae and adults they use their strong pincher-like mandibles to feed on other insects especially fly larva, and should be considered beneficial to humans for the pest control they provide. They are also one of the insects collected at crime scenes to aid in determining the time of death of a corpse as they are attracted to carrion and will feed on the fly larva also attracted to rotting flesh. One could say they are opportunistic hunters.