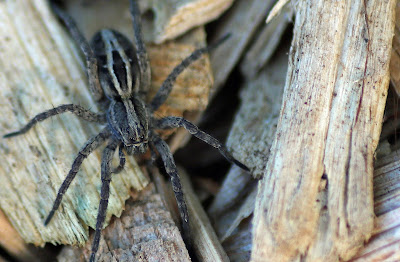 One of the things I love most about this time of year is all the insects and spiders that are out and about, or sometimes hiding under rocks, logs and debris. Tonight while flipping stepping stones I encountered this wolf spider. It sat still long enough for me to take a few pictures so I could go back later and identify it. I find wolf spiders quite frequently around my yard and they are always welcome as the apex hunters they are. This one however was new to me, but I finally identified it as the Lance Wolf Spider (Schizocosa avida). They are found throughout the United States, but are more common in the Eastern portion of the country. These spiders are common and are usually found in fields, meadows, pastures and backyards where there is plenty of places for them to hide out during the day, such as under stepping stones. They may also be encountered in forested areas as some people have reported. According to the authors of "Spiders of the Eastern United States" they are frequently found in swimming pools where they drown or may become caught in the pool filter.

These are large spiders with a legspan around 2 inches or more. Legs are not banded and may be gray, brown or yellow. The body is light brown with a blond stripe down the carapace that extends to the abdomen where it opens to form two stripes that will surround a darker lance-like mark where the spider gets its common name.

Like all wolf spiders they do not form webs to capture prey, instead they wander around seeking insects to capture. They do not chase down insects, but rather sit and wait for prey to come within striking distance. Wolf spiders have excellent eyesight like most wandering spiders and are able to see prey as it approaches, once an insect is within striking distance the spider will rush out and overtake the unfortunate victim and inject venom. Like all spiders the hairs on their legs are also extremely sensitive and may also play a part in sensing nearby prey. If the insect is small it will be eaten right away. If the prey is on the large size there may be a wrestling match until the spider can overpower the insect. The spider will hold its prey in place with her powerful legs, and deliver a fatal bite. Venom acts quickly to begin dissolving the soft tissue inside the body of the insect, so that the spider can slurp it up like an insect-slurpee. Crickets, grasshoppers, beetles and other larger insects make up the largest portion of their diet. They will also eat other wolf spiders, including those of their own species. 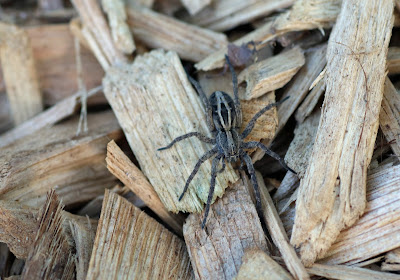 Maturity is reached in May and mating takes place in June. Males die shortly after mating, females live until the first freeze. The female will lay a drag-line of silk near where she is waiting for prey. This drag-line is easily detected by males of her species and plays an important role in mating courtship. A male wolf spider is able to follow the drag-line to the female and may be able to coerce her into mating. He will wave his legs and will use stridulation on leaf litter to show his interest in making her his mate. If she is interested she will accept his overtures and not use him for her next meal.  She will form an egg sac sometime in the early or mid-summer. She will dig a burrow that she will hide out in and look after the egg sac. When the urge to hunt overtakes her, she will attach the egg sac to her spinnerets located at the tip of her abdomen, and carry it with her while she hunts. Her egg sac will contain up to 200 eggs and will hatch sometime late in the summer or early fall. The spiderlings will crawl onto their mothers abdomen where she will look after them for a short period of time until they are ready to disperse and be on their own. Spiderlings may remain in the area where they were born, still others will climb to a vantage point and balloon on air waves to new locations. Those that survive predation by other spiders and insects will overwinter as juveniles and in the spring begin the cycle all over again.
Posted by Shelly Cox at 9:51 PM