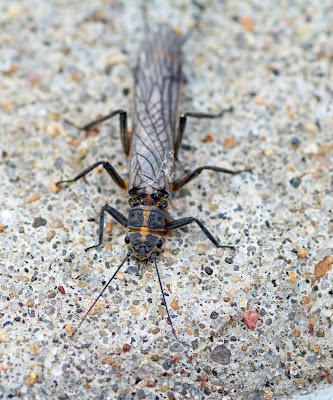 Stoneflies in the order Plecoptera are common insects found in and near streams, springs, rivers and some lakes. There are over 3,500 species found Worldwide with the exception of Antarctica, over 600 of these species are found in North America.

The common name of stonefly most likely comes from their preferred habitat among the rocks and stones in and near the water sources where they live.

Adults are one of the first insects found in the spring near streams or rivers, and many species are even known to be winter hardy and will emerge during the coldest months of the year. Almost every month of the year will see some species of stonefly emerging from the water.

Males and females find each other for mating by "Drumming" on substrate (leaf litter, etc). Each species has a particular drumming pattern they use to locate their own kind. The male will drum first and if a female is nearby she can sense the vibrations of his drumming and will answer with her own drumming sound. They will move towards each other, stopping occasionally to drum again. Once they locate each other they will mate. After mating, the female will produce 100's or 1,000's of eggs depending upon species. She will carry the egg mass around with her attached to her abdomen. She will eventually drop the egg mass into the water. As soon as the mass is submerged it will break apart and the eggs disperse and attach themselves to stones, rocks or other underwater surfaces. Newly hatched nymphs look much like the adults and go through an incomplete metamorphosis, and depending upon species it may take up to three years. Most species however complete their lifecycle in one year. They may go through as many as 22 molts before they are ready to transition to their adult form. The nymphs must leave the water and crawl onto some secluded surface to shed their skin for the final time. Typically they emerge at night to avoid predators such as birds who would find them an easy, tasty meal. 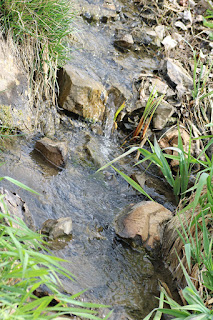 As adults they are poor flyers and usually rely on crawling to get around. Although you may find them at lights at night. As nymphs they live for 10 months or more, but as adults their life is very short-lived and most die within 4 or 5 weeks....some species in as few as 3 or 4 days. Their sole purpose as an adult seems to be to find a mate, reproduce and die....or to feed hungry predators. Stoneflies are important to the environment for many reasons. They are considered bio-indicators of water quality as they cannot tolerate polluted water. The presence of stonefly nymphs would suggest good or even excellent water quality.

They are also an important food source for fish in the nymphal stage and for terrestrial animals when they emerge as adults. Frogs, birds, voles, shrews and insects all feed on stoneflies. Some species of stoneflies have developed ways of avoiding predators. as nymphs they will play dead by folding their head into their body and curl into a ball and not move. A fish will often pass them by as something undesirable. Other species, in the family Pteronarcyidae have developed an even more unique way of avoiding predators, they implement a defense mechanism that involves volunteer bleeding or autohemorraging. They force out drops of their blood through pores located on the third set of legs. This blood is thought to smell or taste bad to would-be predators. Or at the very least it could possibly be a distraction allowing the stonefly nymph to make an escape. 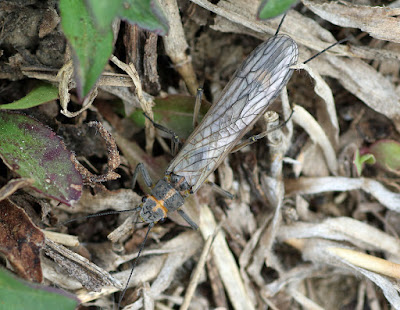 Stoneflies are considered a primitive insect and are closely related to cockroaches. In both stages of life they have tails protruding from their abdomen. They are typically tan, brownish-green or grayish. The one pictured here appears more black to me. I had never seen one quite like this one before and therefore it threw me and I wasn't sure what I was looking at. I asked some friends on facebook what this interesting insect was and they all agreed it was a stonefly. It just goes to show, that just because something doesn't look like what you are used to, don't rule out that it might be exactly what you thought it was to begin with. These insects do not bite, sting or cause any harm to humans and they are easily captured. They make great insects for children to handle to introduce them to the world of bugs with risk of being hurt by a nippy bug.

Stonefly nymphs are also a favorite among fly fisherman and fly-tyers. There are examples of hand tied fly's modeled after stonefly nymphs that are over 4 centuries old!!!! Can you imagine a 400 year old trout fly? Fisherman continue to favor this particular insect as an effective lure for trout, as well as salmon. If it's not broke don't fix it appears to be the mantra when concerning stoneflies, if it worked 400 years ago, it will work today! Happy Fishing!