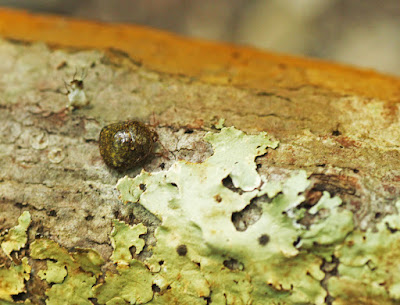 Last summer my husband and I took a trip to Townsend, TN which is one of our favorite vacation destinations. We love the Smoky Mountains and just being outdoors. One day while walking along the Little River looking for spots for my husband to fly fish, I spotted this tiny bug crawling around on a lichen covered twig. I had never seen a bug like it and at first glance it looked like a tiny beetle. I snapped a few pictures and posted them to Facebook and Bugguide.net. It wasn't long and I had an answer. This is the Kudzu Bug (Megacopta cribraria) in the family Plataspidae . So it's not a beetle at all, but rather a true bug in the order Hemiptera and closely related to stink bugs.

They measure 3.5-6 mm (approximately 1/4 inch, or about the size of an adult lady beetle). Their body is a shiny olive-green color covered in mottled brown spots. Their body is not shield-shaped like most stink bugs, instead it is rounded in shape. They go by many different names including Kudzu Bug, LabLab Bug, Kudzu Beetle, Bean Plataspid, and Globular Stink Bug. The name LabLab Bug comes from their native land of China and India where they are pests of the LabLab Bean and other legumes. In 2009 they were discovered in Georgia and since then have spread their range, and as of 2012 includes all of Georgia, South Carolina, North Carolina, Alabama, Tennessee, Virginia, and most recently Mississippi, and Maryland.It continues to spread and I imagine it is only a matter of time before it makes its way into Missouri.

How did they get to Georgia in the first place? No one seems to know, but most likely they hitched a ride in some cargo on an airplane from their home country and managed to get past the inspectors. It is believed that a lone pregnant female is the  single ancestor to all generations and populations that have since established such a strong hold in many areas. Like the Asian Lady Beetle, Marmorated Stink Bug, and many many other invasive insects, they have made themselves at home and in some areas are wrecking havoc.

Kudzu, also know as Japanese Arrowroot, is a vine native to Asia. It was first introduced in the United States in 1876 as an ornamental, presented as an easy to grow shade producer. In the 1930's and 1940's it was again promoted as a way for farmers and landowners to control soil erosion and farmers were encouraged to plant the vine. In southern states farmers were paid $8.00 an acre to sow the seeds of this vine, and over 8,000,000.00 was paid out when ultimately a million acres was successfully planted with what later became known as the "vine that ate the south."

When the kudzu bug made it's way into the United States and landed in Georgia, it found a warm climate full of one of its favorite foods...the kudzu vine. No wonder this tiny bug was able to reproduce prolifically and spread its population so quickly. If this bug would have behaved itself and fed only on the kudzu we could probably learn to appreciate it, if not like it....but as non-native insects are wont to do, they did anything BUT behave. They jumped ship as it were and began feeding on other plants like wisteria, peanuts and other legumes. One plant in particular is a favorite, and that is soybeans, much to the horror of farmers who have found themselves faced with yet another tiny, six-legged crop eating monster. It is not uncommon to have a single soybean plant to be infested with up to 100 adult and nymphs of this species.  Like all bugs in the order Hemiptera, they have sucking mouthparts and use their rostrum to pierce the plant stems and suck out the vital juices of the plant, essentially stunting the plant and greatly reducing the crop yield.  It also causes wounds in the plant stems that allow bacteria to grow and makes room for fungus' and mold to take hold which can also reduce yield or kill the plant. These bugs are not known to feed on the bean pods themselves, just the leaves and stems.

After mating, females will deposit their eggs in small masses on the underside of leaves of the host plant. The female will also provide a substance known as symbiotic bacteria in the form of small brownish capsules. The newly hatched nymphs will ingest this beneficial bacteria which allows them to digest the food plants (legumes) that they feed on. Two generations are produced each season in the southwest. It is not known if they can survive in Northern climates, but as winters become warmer and climate change takes place, in all likelihood they will do just fine. It takes them 6 to 8 weeks to complete their lifecycle from egg to adult.

When autumn arrives and the temperatures begin cooling down these little bugs will begin seeking shelter for the winter. Many will overwinter in ground litter in or near soybean fields or kudzu vines. Others will seek human shelters such as our homes. They seem to be attracted to light colors, especially white. They are even known to aggregate on cars, and RV's. This activity is very similar to that of the Multi-colored Asian Lady Beetles, which also aggregate in large numbers each fall and are also attracted to lighter colored homes. They may make their way inside your home, and end up in windowsills, basements and attics and will leave behind a stench if they occur in large numbers. The odor they give off acts as an attractant to other kudzu bugs and may bring more uninvited guests into your home. You can use a vacuum to sweep them up, or bug spray, if you so desire. Don't leave dead bodies laying around though, as they may attract more unwanted guests in the form of ants or other critters that may want to feed on those tasty little morsels. They may also stain furniture, curtains or other surfaces within your home with the secretions they emit from their legs when threatened.
They are not known to harm humans. They don't bite, but the secretions they emit can discolor skin or leave blisters if you are sensitive to the substance they produce.

These bugs are certainly a pest of great interest to farmers, gardeners, greenhouse owners and the agricultural industry in general. The agricultural industry is continuously monitoring their population and possible expansion into new areas. If you think you have spotted one of these bugs, be sure to report it to your local extension office. Especially if you are in a state that is not shown on the above distribution map. 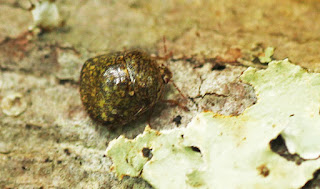