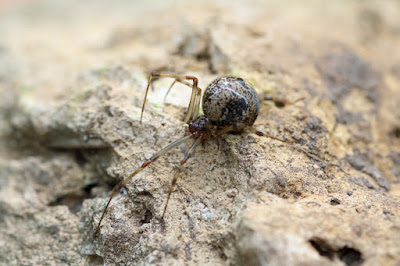 This oddly shaped, extremely bulbous spider is a house spider (Parasteatoda tepidariorum). I discovered her on the back of my house resting in the middle of a messy web she had created. I placed her on a rock to photograph her and discovered that she was a contrary specimen to capture an image of. She NEVER stopped moving!!!

I had never seen a spider like her and submitted an image to Eric Eaton of Bug Eric to ID and within seconds he was able to supply me with a name for this spider. I found the name of "House Spider" to be rather dull and boring for such a stunningly gorgeous spider. He told me they are highly variable in coloration, and I must have one of the above average specimens in the looks department. Even though this is the first time I have encountered this particular spider (at least as far as I can recall), they are considered one of the most common spiders within the United States. They typically build their webs near human structures where they provide excellent pest control of many insects considered pests by humans, including wasps, cockroaches, ants, flies and mosquitoes. They are even known to try and capture grasshoppers and other larger prey by casting a line of silk at them...rather like spider-fishing. Some specimens will leave flies or other delicacies within the web to lure tiny juvenile skinks into the web so they can feed on a much larger meal. Once the web is full of discarded carcasses they will clean house by dropping the dead bodies to the ground. This keeps things tidy and allows them to keep using the same web without having to build a new one. 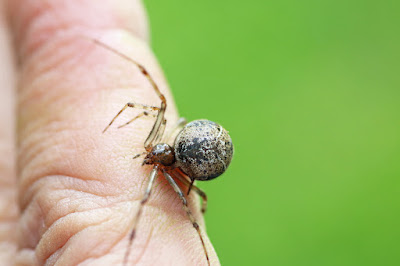 They somewhat resemble black widows, at least in body shape. Unlike widows, which have toxic venom that poses a potential medical threat to humans, these spiders lack venom of any medical significance to humans. Because they reside near humans structures they are somewhat used to human activity and are not bothered by constant human motion. They aren't even particularly defensive, as evidenced by the this one sitting on my finger. She never reared up or even attempted to bite. That doesn't mean they cannot or will not bite, it just means they prefer not to. If they should bite as a result of being smashed or hurt it is no more painful than a bee sting and may cause some itching or slight swelling at the bite sight. if you are sensitive or hyper allergic to bee venom, then the venom from this spider may be of medical significance. They will usually retreat behind a nearby secluded area close to the web if too terribly disturbed. They may also drop from a line of silk and attempt to escape. Their marbled coloring is drab brown mixed with various shades of tan, gray and black which gives them excellent camouflage and they often blend into their surroundings and may go unnoticed by humans. They may also play dead as a last resort if being harassed too much. 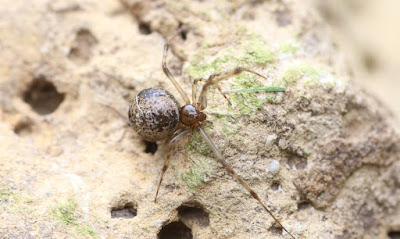 Females are tolerant of males hanging out in their web and you will often find males and females together. Females will build webs within close proximity to each other....but if they happen to encounter each other they will fight. 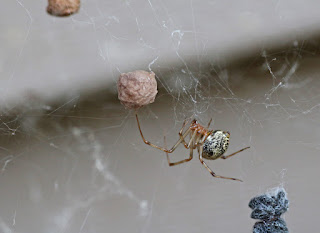 After mating, the female may produce 15 or more egg sacs, each containing up to 400 eggs. The spiderlings will remain within the web near the female for awhile before dispersing into the environment. There is a species of assassin bug that feeds exclusively on the spiderlings of this species, so no worries of 1,000's of these spiders surviving in any given location. There are also a couple of spider species that feed on house spiders. 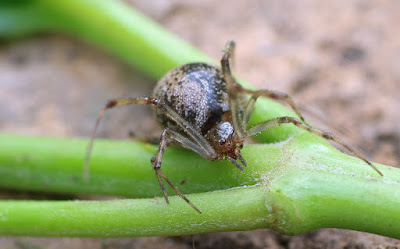 This spider is often mistaken for brown widows, as their coloring is similar, but they lack the orange hourglass on the underside of the abdomen like the widow.

MEANING of Scientific NAME
As reported by:
U.S. Spiders

The genus name is a combination of the Greek prefix para-, meaning “beside, near” and the genus Steatoda. Prefixes like that are sometimes added to existing genus names in order to form new names for related genera. The name Steatoda literally means “tallowy” in Greek, but it’s assumed that Carl Sundevall was going for something more like “rotund.” The specific epithet, tepidariorum, is a Latin combination that we believe means something like “from the greenhouse (from the warm house)” or “warm area.” C. L. Koch first noticed this species was common in greenhouses at the botanical garden of the University of Erlangen in Germany, so that must be why he chose that name.
Posted by Shelly Cox at 9:22 PM