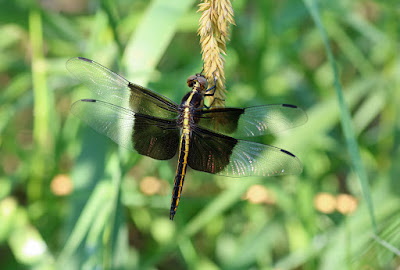 Widow Skimmers (Libellula luctuosa) are one of the most common dragonflies found in Missouri. They occur most everywhere in the United States with exception to the highest points of the Rocky Mountains.

Like all dragonflies they begin their life in water as nymphs or naiads, feeding on aquatic insects and tiny minnows. They will emerge from the water and shed their skin in their final instar or molt to their adult form. Adult females vary somewhat in color from adult males. Females look very much like immature males and have yellow stripes on either side of their abdomen and a yellow stripe down the center of their thorax. Adult males eventually lose the yellow stripes on the abdomen and they become a powdery blue. They are medium to large sized dragonflies with a wingspan up to 3 inches. 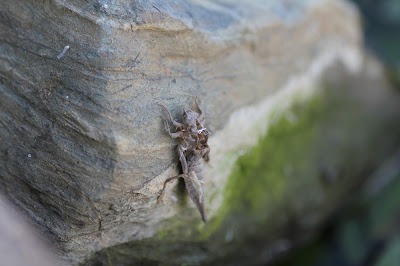 The species name of luctuosa translates into sorrowful or mournful, and is most likely due to the appearance of being draped with a mourning cloak across the wings. In most species of dragonflies the male will remain with the female, guarding her, as she lays eggs in the water. In this species however the female is "widowed" as the male leaves the female to her own devices to lay eggs without his protection. This activity could also be where they get their common name of Widow Skimmer. 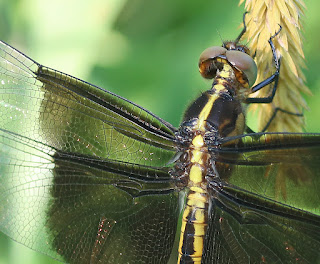 Males are territorial and will fight off other males for the attention and right to mate with nearby females. They will even chase away males of other species which are no direct competition for them. This seems like wasted energy to me, but when in doubt chase any possible suitors away which guarantees your right to mate over any other males in the area. Often this species will form male groups in a territory where there is one dominant male that will most likely mate with the females....unless one of the lesser males can pull one over on the dominant male and manage to mate without him being any the wiser.

They are found in areas near slow moving streams, small lakes, ponds and other still waters. We have them in our backyard koi pond as well as a few other species. It is always entertaining to watch them as they chase other males away and compete for females. Like all dragonflies they are carnivores and feed on other insects and they are welcome guests to the backyard as they feed on moths, flies and mosquitoes. 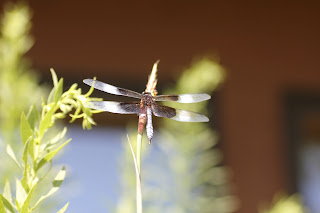