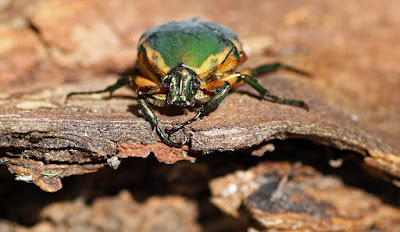 Green June Beetles (Cotinis nitida) are scarabs in the family Scarabaeidae and are very common throughout the Eastern United States. You will first begin to see them in June when the larva, or grubs as they are referred to, complete their final moult and emerge as adults. These are fairly large beetles that reach lengths up to 22 mm, or 1 inch. Their loudly buzzing, clumsy flight sounds very much like a bumble bee. Green June Beetles are beautiful scarabs with green metallic wings, edged in gold with bright green legs, head and underside. 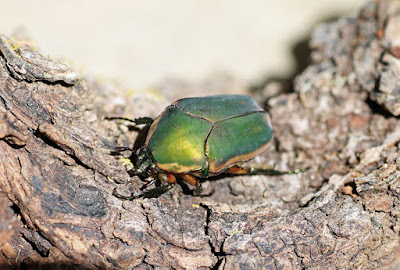 Mating takes place during the morning in mid-summer. The female emits a strong-smelling milky pheromone that the male is attracted to and can smell from great distances. Mating lasts several minutes before the male departs and the female disappears into her burrow or under a nearby clump of grass. If mating was successful she will lay up to 75 eggs over the course of 2 weeks. She typically chooses organically rich soil to lay her eggs. The larva, or grubs as they are called, feed on humus and mold early in their development. In their final instar they move closer to the surface of the ground and their feeding habits switch to roots of turf grass, ornamental plants and garden plants. If these beetles occur in large enough numbers their feeding can cause significant damage to grasses, and plants. The grubs pupate in early spring and finish their development by late May or early June when the first of the adults will begin to appear, the peak emergence is in mid to late June.

The adult beetle uses the horn-like projection on their head to tear into soft skinned fruit like peaches, plums, and grapes.

They will feed on the flesh of the fruit making it unmarketable for selling. Although the feeding damage caused by late instar grubs is considered more damaging than the feeding habits of the adults. We encounter them once in awhile in our garden, but never in numbers significant enough to cause damage. This could be in large part because we don't use insecticides of any kind. Instead we have a healthy population of birds, bats, and various mammals that all feed on these beetles. Moles will feed on them in the grub stage underground and we certainly seem to have no shortage of moles around here. There is a species of of digger wasp that will burrow into the tunnel of these beetle larva and sting the grub, paralyzing it. Then she will lay and egg on the grub. When the wasp egg hatches it will feed on the paralyzed grub until it is ready to pupate. By not using insecticides or fungicides the beneficial bugs thrive and help control insects that we may not want around. We farm 86 acres where I live and we haven't used insecticides for well over 20 years and I am very proud of that fact. I can say with all honesty we do not have any trouble with crop pests. Often if we will just let nature take care of itself it will do a great job without our interference.

Unlike their brown cousins the June Bugs or May Beetles, which are active at night, Green June Beetle are day active beetles. The one pictured here was found at my work place in the parking lot in the middle of the afternoon. 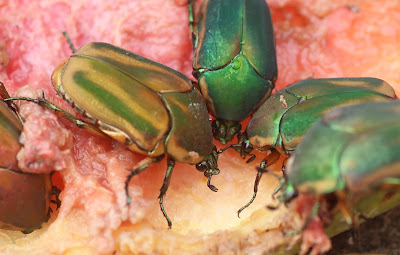