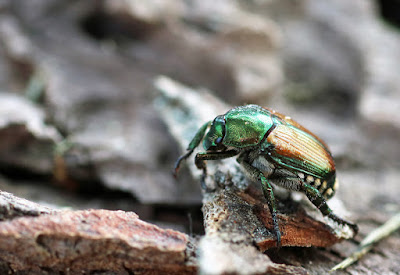 Japanese Beetles (Popillia japonica) in the family Scarabaeidae are native to Japan and made their way into the United States in a shipment of iris bulbs as early as 1912. It wasn't discovered until 1916 inside a nursery in New Jersey. This beetle is known to feed on over 300 varieties of  plants often destroying them. In their native country there are natural predators that feed on them, however in the United States there are no effective natural predators. Birds, frogs and other animals generally won't eat them when they come across them, so they must taste bad. As adults this beetle typically feeds on the green fleshy part of the leaves of plants, leaving only the veins of the leaves. They can skeletonize leaves very quickly and if they occur in large enough numbers they may kill the plants they are feeding on. They may also feed on the fruits present on plants such as grapes, blueberries, etc. In the larval stage, or as grubs, they feed on the roots of various grasses and plants. This beetle in the grub stage, is highly susceptible to a disease called milky spore and scientists have created a biological control agent, Paenibacillus (formerly Bacillus) popilliae. It comes in a powder form that is applied to lawns, but may take several years of application before it adequately controls the population of beetles present on your property. A wasp in the genus Tiphia and a fly in the genus Istocheta have both been proven as effective bio-control, as they will parasitize the beetle. Certain plants are known to repel them such as chives, catnip, and garlic, but with limited success in helping protect plants adjacent to them from the onslaught of these beetles. The estimated damage to turf and ornamentals each year is $450 million, that isn't counting the damage to row crops, forage or trees.

These beetles are rather bumbling in their flight pattern and rarely fly too far in search of food, but they are capable of flying up to a mile for adequate food sources if need be. They give off a pheromone as they feed which attracts additional beetles in the area and results in large aggregations of these beetles all feeding on your prize roses or other plants. When disturbed they will drop off the plant to the ground to avoid being captured by a predator. 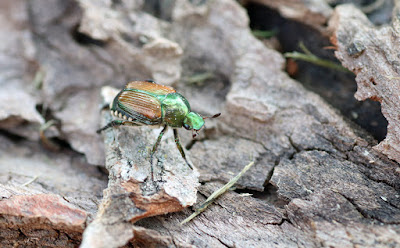 These beetles are tiny at 15mm (approximately 3/8 of an inch) in length with shiny green head, thorax and midline between the wings. Wings are iridescent and may appear brownish, amber, purple or greenish. At the end of the abdomen is a series of white tufts of hair that is a distinctive characteristic of this beetle.
The one pictured here came into work attached to a guests purse. When she picked her purse up off the counter, the beetle was resting on the counter. My coworker captured it and I photographed it before adding it to my insect collection.

Adults emerge from the ground in late spring and mating takes place soon after emergence. Once mated the females will burrow 2 to 3 inches into the ground to lay their eggs. She may lay up to 60 eggs in her lifetime and once the eggs hatch (in about 10 to 14 days) the young grubs will live underground feeding on roots for 10 months before emerging the following spring and beginning the cycle all over again.

While these are attractive beetles, they should not be tolerated in your garden, yard or agricultural area. The amount of damage they cause is significant enough to create millions of dollars in loss each year to the turf, and agricultural industries alone. Traps are one way advertised to control these beetles, but all indications point to these traps not being effective as the beetles often land on the outside of the trap and very few end up IN the trap. These traps also use pheromones to attract the beetles which can be counterproductive to eliminating the beetles from your area, and may in fact encourage MORE beetles. If your beetle population is small enough you may lay a drop cloth on the ground below the plants and in the morning shake your plants causing the beetles to fall onto the drop cloth where  you can roll them up and destroy them naturally. You can also put a pan of soapy water below your plants and knock them into that. You may also chose to apply insecticides which are  approved for killing them, but be aware these insecticides may also harm beneficial insects such as honey bees. 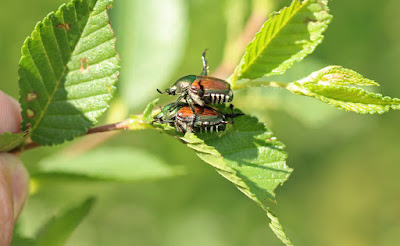