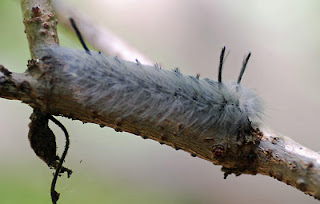 This grandfatherly-looking caterpillar is the offspring of a Spotted-Apatelodes Moth(Apatelodes torrefacta). The caterpillars can vary in color from gray (pictured), to yellow or even white. There are tufts of black hairs and black spots along their side, which aren't readily visible because of the fluffy nature of this caterpillar. There are many fuzzy caterpillars crawling around outside and most of them are the larvae of Tiger Moths and we call them Wooly-Bears. So how do we tell the difference? This species has hair that lays flat along its body, rather than sticking up wily-nily all over its body like other caterpillars, this one also features those long black tufts of hair.I read one report that claimed they have bright orange feet; how I wish I would have flipped this one over to see that!
As adults; the puzzle grows even more, whereas the young favor tiger moth caterpillars, the adults favor sphinx moths. When I first spotted this moth on the grass in our front yard I thought it was a Sphinx moth, although I had no idea which one. I sent this image into Bugguide and within minutes it was identified as the Spotted-Apatelodes Moth. They are in the family Bombycidae, which are silkworm moths. These differ from the  Giant Silk Moths like Luna Moths and Cecropia Moths in several ways...... 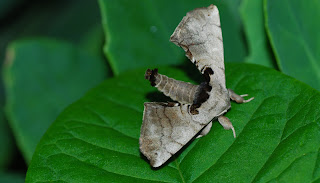 For one thing they are much smaller(wingpan up to 2 3/4 inches), but also one member of this family are the producers of the silk we humans have come to favor.
(Bombyx mori) are native to northern China and have been used extensively in the production of silk for over 4,500 years. These caterpillars are no longer found in the wild and are bred entirely in captivity. They are fed a diet of Mulberry leaves.China continues to be one of the top manufacturers of silk.


The Spotted-Apatelodes is closely related to the Silkworm Moth that is used in silk production.
The spotted-apatelodes caterpillars feed on Cherry, Ash, Maple and Oak. There is also documentation that they feed on other fruit trees as well.  The adults are not reported to feed, nor could I find any information of their lifecycle beyond one report that stated mating takes place in the summer and the caterpillars will overwinter in the pupal stage. In their Southern most region they may produce up to 3 or more generations per year. In their Northern most range they will only have one generation. They can be found in deciduous forests and nearby areas, presumably where the host plants would be found.

While doing my research on this species, I visited the www.butterfliesandmoths.org (BAMONA) website and discovered that there were no reported sightings for this moth in Missouri. I contacted our regional representative for BAMONA and told him about my finding this particular species in NW Missouri and sent him this picture. He thanked me and assured me it would be added to the data base.