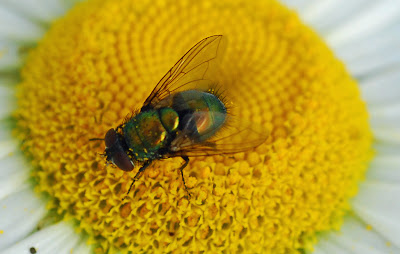 Green Bottle Flies are in the genus Lucilla and range Worldwide. These are small flies measuring up to 3/8 of an inch. They are bright metallic green or golden with black markings. They have three horizontal grooves on the thorax and bright reddish colored eyes. These flies are associated with animals and can be found most anywhere, including farms, stockyards, rural areas, as well as urban and suburban areas.
These flies are prolific breeders and will have numerous generations per year. Mating takes place soon after the flies emerge from their pupal stage. The female will lay eggs on carrion or in the wounds of animals. The eggs hatch in 12 hours or up to 3 days later (depending on the outside temperature). The little maggots feed on carrion and reach full size anywhere from 2 to 10 days. At this time they will drop to the ground and burrow into the soil to pupate. In a few days the newly formed adult will emerge from underground and begin the cycle all over again.
How do you tell a male fly from a female fly? Males have eyes that touch, females have wide set eyes.  ( Therefore the one pictured in the first and second pictures is a male) 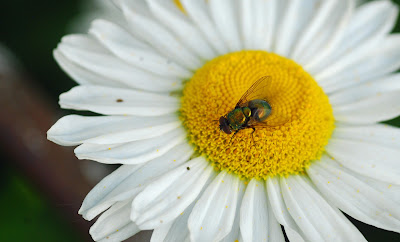 The adults of this fly feed on sweets, especially nectar or picnic favorites like soda pop.
It is best to keep them away from food meant for human consumption. These flies are capable of spreading disease. They crawl around on manure, and dead carcasses, then fly to Aunt Junes' potato salad and bring with them whatever they may have picked up while crawling around on those unsavory piles of poo and carrion. This in turn can spread very nasty germs to our food, then on to us as the consumer of the potato salad. Best to be careful, and keep food covered as much as possible.

This particular species was bred in captivity for "Maggot Therapy". What is maggot therapy, you ask? It is a  very disturbing medical treatment that involves placing the maggots of these flies on necrotic wounds. The idea behind this is the fact that maggots only consume things that are rotting or already dead. Therefore they clean up the dead, unhealthy flesh of a wound that refuses to heal. While it might make our skin crawl (literally) to imagine anything so unsettling, if it meant saving your life I bet you could do it. With todays modern antibiotics the use of maggot therapy only occurs in extreme situations.

Flies are rarely anyone's favorite insects; they can be annoying as they hover around our faces, or our food. They invade our houses and drive us crazy as they fly around and buzz their whining little wings near our ears. They seem to have developed super fast reflexes and can dodge our attempts to swat them with flyswatters. For all the bad that is associated with flies, I need to point out there is much good as well....the maggots aid us by consuming the rotting and dead flesh of animal carcasses, and maggot therapy has saved numerous lives. Overall flies aren't the bad guys that we often make them out to be. 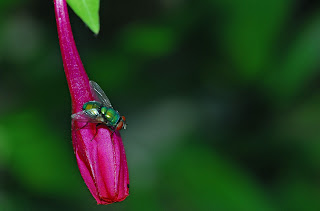