Chilean Rose-Haired Tarantulas do not call Missouri home, except maybe as someones pet; as in this case. I bought the one pictured here several weeks ago from a local pet store for $17.00. They are native to Chili and for many years were imported by the thousands to the United States. Chili ceased all importation of these spiders and now all Rose-Haired Tarantulas are from breeding stock already in the United States.  These  tarantulas are often recommended for people who wish to own a tarantula but have no experience with them. It is relatively easy to locate a breeder and often they are available at your local pet store.  They are generally gentle by nature, relatively slow moving for a spider and beautiful to look at. The cost is low in comparison to other tarantulas, mostly because of their commoniness and their hardiness in captivity.  This is the second species of tarantula that I own, the first being the Oklahoma Brown which is native to Missouri. 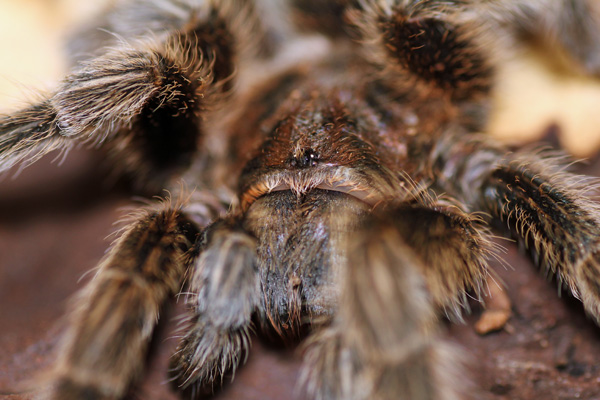 These tarantulas are considered a mid-sized tarantulas with a legspan up to 5 inches. Males will usually have longer legs and furrier bodies than females. Some even claim that the males are more colorful, but this is probably not true, simply because there is so much variation in the breed. In fact the variation is so complex that many say there are three species of Rose-Haired Tarantulas, depending upon color formation.  Grammostola rosea would be the standard Rose-Haired with the black or dark brown body and pinkish colored hairs. Then there is Grammostola cala which has reddish colored hairs, and lastly is Grammostola spatulata, which has brownish colored hairs.
This is consequently one of the most difficult spiders to identify to species. There is so much speculation as to whether or not each color morph should be considered its own individual species, plus the species itself has gone through numerous name changes.
These tarantulas are one of the easiest to keep in captivity, they  require little room and only moderate humidity levels. They like a little hide to be able to crawl into and a few crickets or grasshoppers each week. They are easy to handle, just place your hand in front of them and gently coax them onto your hand. 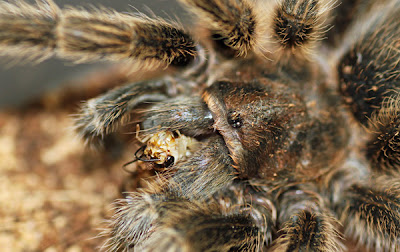 (Rosy eating her cricket)
They do stress easy so handling should be kept at a minimum. Occasionally if they are feeling particularly cranky they may flick their abdomen hairs. If there is a bald spot on their "rump" it is a pretty good indication that they have recently been stressed. If mine begins flicking hairs I leave her in peace and handle her another day. Just like us humans, they have days where they just don't feel like being messed with. Your spider won't remain bald, it will eventually shed its skin and reveal brand new beautiful hairs where previously there were none.
Shedding is a difficult time for a tarantula. The process begins many weeks before the actual shedding. It starts by growing new skin underneath the old skin that will be shed. They may act lethargic and stop eating at this time. When they begin molting they will flip onto their back (so don't be alarmed if you see this, your spider hasn't died). From this position it will slough off its old skin, including the inside of its mouth, respiratory organs, sexual organs and stomach. So you can see where this would be an extremely trying time for the spider, but if the humidity level is correct within the enclosure all should go well and within minutes the old skin will be shed. They will be very vulnerable  at this stage. Their new skin is soft and delicate and must harden, which depending upon the size of the spider may take a couple weeks. Smaller spiders require less time to harden their skin than do larger spiders. During this time, the spider will most likely not feed. 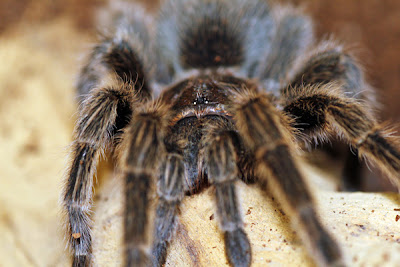 It takes these spiders approximately 3 to 4 years to reach their full adult size. It is at this time that they may breed in the wild. Males will begin by producing sperm webs indicating he is ready to breed. If you have a male and female in captivity you may try placing them together at this time and see if the female is receptive to his attentions. That is if you wish to have little baby tarantulas (more than 500 at a time). Males will seek out the female and tap a little dance with his legs to lure her out, he will then pounce on her and use his front legs to lift her chelicerae out of the way so he doesn't become her next meal. He can also lift her almost completely onto her hind legs from this stance allowing him access to her epigyne so he may deposit his sperm. If she is fertilized; within a few weeks she will produce an egg sac that may contain more than 500 spiderlings. Usually the male will die shortly after a successful mating, unless of course the female kills him first.
If you have been thinking about owning a tarantula, let me recommend this docile, beautiful creature as your first foray into the world of tarantulas, you won't be disappointed.
Posted by Shelly Cox at 7:19 PM